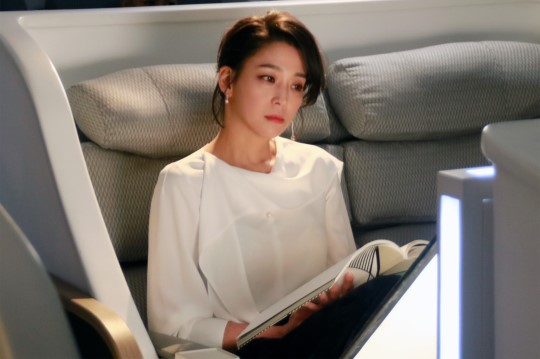 Actress Han Go-eun's still cut was released for her first appearance in the drama "Shall We Kiss First".

In the last episode of "Shall We Kiss First", it was revealed that Kang Seok-yeong, played by Han Go-eun, will be returning to Korea and the viewers are anxiously waiting for the next episode. In the picture released on March 12th, Han Go-eun is featured in a sophisticated look while mulling over something. What will happen to Son Moo-han and Ahn Soon-jin as Son Moo-han's ex-wife, Kang Seok-yeong returns?

Meanwhile, the viewers are excited to see Han Go-eun in a drama again. Her timeless beauty and her unique aura that combines both a graceful and sexy image is still part of her endless charm.

"[Lily's Take] Han Go-eun's First Appearance in "Shall We Kiss First""
by HanCinema is licensed under a Creative Commons Attribution-Share Alike 3.0 Unported License.
Based on a work from this source