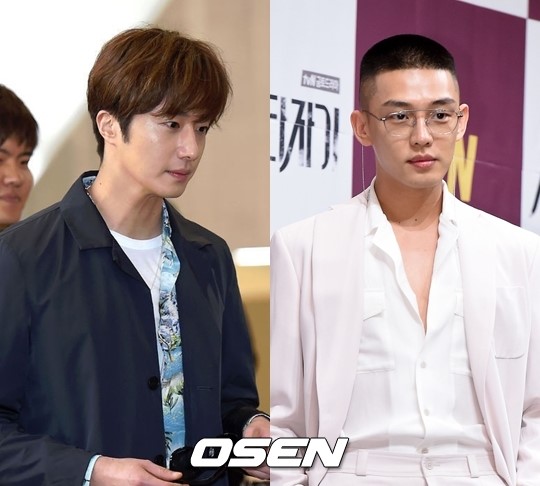 Actors Jung Il-woo and Yoo Ah-in are under fire for their SNS posts as there are active arguments about actor Jo Min-ki's death online.

On March 9th, both Jung Il-woo and Yoo Ah-in posted something meaningful on their official social media account and it is safe to assume that they are written towards actor Jo Min-ki's sudden death after his alleged sexual harassment accusations.

Jung Il-woo posted a plain black image with a caption saying, "Pray for you" on his social media. Jung Il-woo has a history with Jo Min-ki as they acted in the drama "Golden Rainbow" together in 2013 and the netizens guessed that the post serves the purpose of memorial and respect for Jo Min-ki's death. The netizens did not hesitate in expressing their discomfort towards the actor and the post and Jung Il-woo's post was deleted shortly after. Jung Il-woo have not spoken about the post or Jo Min-ki since it was deleted.

On the other hand, Yoo Ah-in posted a short video of a person being tied down and burned to death while the people surrounding the person just watching. Yoo Ah-in is famous for his open communication with the fans as he approaches the issues of the society with his honest opinions, posting his thoughts on the social media. The video is very suggestive of the situation 'witch-hunt' and netizens quickly caught up that the video must be pointing towards Jo Min-ki's case. Though his post is currently under fire from furious netizens, Yoo Ah-in has not provide any further explanation nor delete the video.

Upon Jo Min-ki's death, netizens are divided into two groups; one defending the death of the actor, saying that he shouldn't be disrespected any further, while the other side says that he was irresponsible and cowardly till the end.

Even though Jo Min-ki was respected as a veteran actor in his life with a solid filmography, showbiz is extremely careful in paying respect for Jo Min-ki's death because of his sexual harassment accusations. So Jung Il-woo and Yoo Ah-in's posts have become bigger news as other celebrities keep their silence. Yoo Ah-in's post is especially bold, since he is suggesting that everything was a witch-hunt and it is time to put a stop to everything.

It is an uncomfortable topic for sure, as people are questioning if the Metoo Movement brought justice to people deserving the consequences or if it has unfairly hurt others.

"[Lily's Take] Jung Il-woo and Yoo Ah-in's SNS Posts for Jo Min-ki Anger Netizens"
by HanCinema is licensed under a Creative Commons Attribution-Share Alike 3.0 Unported License.
Based on a work from this source