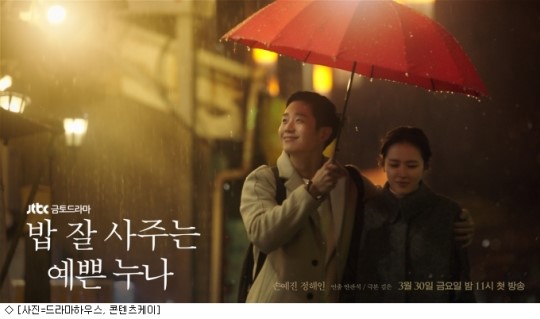 Scheduled to air its first episode on March 30th, "Pretty Sister Who Buys Me Food" released the posters of the main couple, Son Ye-jin and Jung Hae-in. In the posters, the slight change in their relationship from friends to something more has captured the viewers' attention. 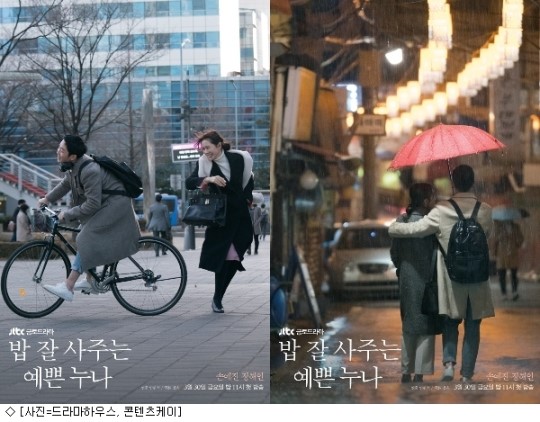 One of the posters features Jung Hae-in and Son Ye-jin playing around on their way somewhere, genuinely enjoying each other's company. Just by looking at the poster, you can almost hear their laughter as they are having fun and treating each other casually.

In the next posters, as the two walk down a rainy alley under one umbrella, their casual attitude changed into something a bit more intimate. This time, instead of their laughter, you can hear and feel their heartbeats. Shy, but flirty, it is showing how their relationship will change over the course of the drama: from friendly pals to hearts fluttering for each other. The romantic is in the air all around them.

According to a staff member of "Pretty Sister Who Buys Me Food", the poster features specific scenes from the actual show. They tried to capture the most natural atmosphere of a couple just started dating. The production is hoping that this drama will relate to people of all circumstances, people who've never experienced passionate love, people who have, and people who are currently experiencing that sensation as everyone watch the love story between Son Ye-jin and Jung Hae-in.

"[Lily's Take] Romantic Posters of "Pretty Sister Who Buy Me Food" Revealed"
by HanCinema is licensed under a Creative Commons Attribution-Share Alike 3.0 Unported License.
Based on a work from this source