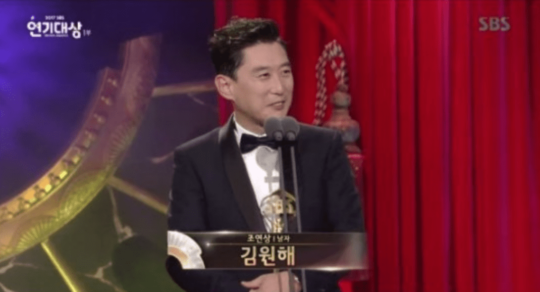 In 1991, this splendid actor debuted has always worked diligently although not always recognized. In the last few years, his hard work finally paid off and audiences are becoming quite familiar with his name. Kim Won-hae humbly accepted the award. "It took me about 50 years to stand here. I think this award was given because of how old I am. I'm very grateful for it. I will work harder as I take this award as a symbol of diligence".

He continued, "I'm grateful for all of the cast and staff members of "While You Were Sleeping - 2017". A clown just needs to get crazy for a little while when a stage is put up, and the staff did an excellent job at setting up that stage".

Many netizens are congratulating the actor for his hard work and agreed that it is high time for him to be awarded for his fine acting skill. Some even said this was the toughest competition of the 2017 SBS Drama Awards that Kim Won-hae more than deserves.

"[Lily's Take] SBS Drama Awards - Kim Won-hae's Well-Deserved Award"
by HanCinema is licensed under a Creative Commons Attribution-Share Alike 3.0 Unported License.
Based on a work from this source