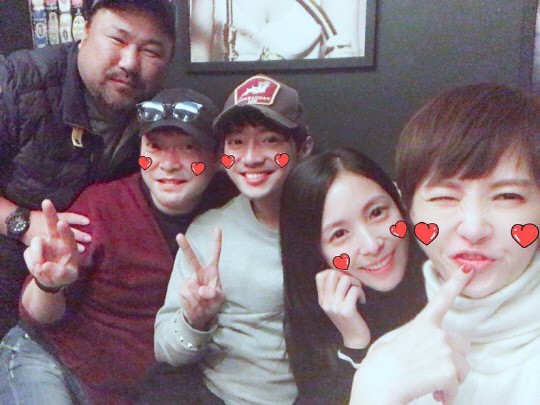 Singer and an actress, BoA revealed a selfie taken with her fellow 'Natgarim (Shy)' squad members on her Instagram.

On the 11th, BoA posted the above photograph with a caption saying, "Dear us. Ahn PD is the extra".

In the photo, the members of the celebirty Shy Squad Ko Chang-seok, Son Hyun-joo, and actress Kim Sun-ah posed together. Alongside them, Actor Lee Sang-yeob, who acted together with BoA in the drama "My Wife Is Having an Affair", is smiling brightly.

This small celebrity squad is made of big stars who have a shy nature, including actors Yoo Hae-jin, Ma Dong-seok, Jang Hyuk and Song Joong-ki.

"[Lily's Take] The Shy Squad assembles - BoA, Son Hyun-joo, and Kim Sun-ah"
by HanCinema is licensed under a Creative Commons Attribution-Share Alike 3.0 Unported License.
Based on a work from this source