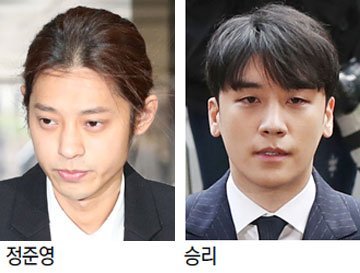 Investigations have taken place regarding the secret language that appears repeatedly in singer Jung Joon-young and Big Bang's Seungri's Kakao Chat room, which seem to be referring to drugs.

Some of the participants in the chat group repeatedly mention a certain word and leave messages such as 'Let's have it today', so the police believe it may be a secret code for drugs.

Seoul Metropolitan Police Agency noticed words like 'meat' and 'candy' appeared several times in the chat room which seem to refer to 'weed' and 'ecstasy'. Police say they shared conversations saying, "Do you want meat today?" or "Let's get candy tonight" and it appears they are talking about drugs.

A close source of Jung told a reporter, "I've seen them talking about 'meat' and a friend who was in that chat room told me 'meat' meant 'weed'". The source also heard this friend say he had 'candy' with his girlfriend. 'Candy' refers to 'Molly', a designer drug of ecstasy which induces hallucination.

The source also said the members of the chat room shared ways to avoid narcotics checks between 2016~2017. That was when another member of the group got arrested for smoking weed. The members of the chat group said bleaching and dying hair several times could help to avoid hair tests and getting fluids at the hospital prevented urine from testing positive.

"Lingo from Jung Joon-young Chat Rooms Decoded"
by HanCinema is licensed under a Creative Commons Attribution-Share Alike 3.0 Unported License.
Based on a work from this source