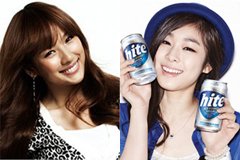 More and more top stars are appearing in ads for alcoholic beverages, which critics say could be one reason for Korea's cavalier attitude to heavy drinking.

Women are especially sought-after for soju commercials, which have featured pop diva Lee Hyori and actresses Shin Min-ah and Kim Tae-hee, to name just a few, making the commercials an increasingly reliable gauge of a female celebrity's marketability.

Members of manufactured pop bands are often the first choice for beer commercials, even though their fan base consists mostly of teenagers. The boy band Big Bang were the first pop combo to appear in a beer ad in 2009. Following in their footsteps were other manufactured bands whose members were barely over 20, including 2PM and 2AM.

Professional athletes also often appear in beer ads. In 2005, Park Ji-sung of Manchester United appeared in a beer commercial, and more recently figure skating champion Kim Yu-na followed in his footsteps. Some are unhappy. "There are certain boundaries that should not be breached", tweeted Lee Jang-woo, chairman of The Brand Marketing Group, last month.

These ads would not be possible in the U.S., where regulations by the U.S. Bureau of Alcohol, Tobacco and Firearms ban sports celebrities from appearing in liquor ads for fear that their appearance could give the impression that they are promoting drinking. The Independent Broadcasting Authority of the U.K. stipulates that celebrities who are popular among teens cannot appear in liquor ads, while French TV prohibits any kind of commercial for alcohol.

But Korea has no such regulations. "Liquor ads featuring popular celebrities could result in promoting a culture of heavy drinking", said Shin Young-chul, head of the Korean Academy of Addiction Psychiatry. "Proper regulations must be put in place".