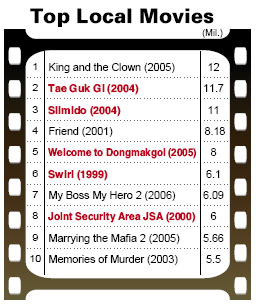 Heavy on anti-Japanese sentiment or rather on anti-foreign forces sentiment, "Hanbando (Korean Penisula)" is the latest among the nationalism-tinged films that have become box office hits.

Despite concerns over the film's controversial theme, "Hanbando" ranked top at the box office this week, dethroning hitherto Hollywood blockbusters such as "Superman Returns", and "Pirates of the Caribbean: Dead Man's Chest" from local movie theaters.

According to KnJ Entertainment, the film's production company, "Hanbando" drew over 1.5 million moviegoers for five days since its release on July 13. It is currently shown at 500 screens, one-third of the 1,500 screens across the country. There are few competitors at the box office.

But the film's controversial theme has drawn mixed reviews from audiences. A flotilla of Japanese and Korean naval forces stand face to face on a calm East Sea. It's not over the Dokdo islets, but over Japan's claim to reconnected inter-Korean railway. Japan claims ownership to the railway, which is symbolic of Korea's turbulent modern historybuilt at the turn of the century by the then-colonial Japan, severed during the Korean War and then reconnected post-Cold War.

Those who enjoyed the film praised it highly saying that the current and past situation of Korea is mirrored well in the film.

"I liked the film, despite some flaws in the development of the story in the later half of the film. It gave me a moment to think about my country and history", Kim Ji-hong, 28, office worker, said.

English instructor Suh Bo-yon, 32, said, "I think the film stimulates the sentiments that Korean audiences share, commercially and in an interesting way. And as a commercial film, nationalistic themes didn't really irritate me a lot".

But those who criticize the film, including Kim Hye-jung, 25, an officer worker based in Seoul, say that it is out of tune with reality and intentionally strikes nationalistic nerves for its commercial success. "It doesn't really make sense", Kim said. "It has a too narrow perspective on the complicated diplomatic situation, and it abuses the Koreans' negative sentiment against Japan for its commercial success".

The film's director Kang Woo-seok doesn't cringe because of such negative criticism. He also does not hide his purpose and openly says that his film aims to criticize Japan.

"This is not a film that merely criticizes Japan without reason", Kang told reporters earlier this month after the pre-screening of his film at Seoul Theater, downtown Seoul. "Considering its thoughtless behavior, I really wanted to attack Japan through my film".

Such movies with nationalistic themes, however, didn't translate into automatic success at the box office. There are such commercial flops as "Phantom the Submarine" (1999), "Heaven's Soldiers" (2005) and "Rikidozan" (2004) and others.

These films show different degrees of nationalism or emphasis on patriotism, but generally, nationalism is explored either by presenting North Korea in a sympathetic light as a struggling sibling or by depicting other powers such as Japan, China and the United States as an imperialist enemy that threatens the nation's independence. Sometimes it simply works as a part of marketing strategy to harness national pride.

The success of "Shiri" initiated the trend toward films presenting the North as a wayward brother, a shift that coincided with the introduction of the "Sunshine Policy" toward the Communist country by former President Kim Dae-jung. Nationalism combined with historical tragedies such as invasions by Western powers as well as Japan have since offered local filmmakers a range of possibilities.

But experts voice concerns over the radical nationalism in movies, saying that many rely on sentimental patriotism without careful insight.

"Nationalism in movies tends to make it hard to take a balanced approach to historical events and the current situation", said Kim Heoun-sic, a pop culture critic, who writes columns for Internet news sites.

Kim also said Koreans' lack of national pride leads to the production of films with nationalistic themes as a form of vicarious satisfaction.

"In such films as `Fighter in the Wind' and `Rikidozan', a heroic Korean character physically defeats Japanese fighters while attracting Japanese women, such scenarios show how desperate Koreans are to prove they are superior to Japanese", Kim said. A recent poll on national pride backs his argument.

In the survey of the levels of patriotism in 34 countries, South Koreans ranked 31st. The survey issued by the National Opinion Research Center at the University of Chicago showed that Americans topped with Japanese standing at 18th.

People assessed how proud they were of their countries in 10 categories, including political influence, social security, economic success, science and technology, sports, arts and literature, military and history.

Other experts say that popularity of films with nationalistic themes goes to show that the films merely mirror what people want.

"Movies are based on the reality and reflect what audiences wants to see", said Gina Yo, a film critic and professor at Dongguk University. "The films with nationalistic themes results from the collective sense of inferiority or anger of their suppressed past, and they are in some ways an outlet to let the anger go".

"Local Movies Thrive on Nationalism"
by HanCinema is licensed under a Creative Commons Attribution-Share Alike 3.0 Unported License.
Based on a work from this source