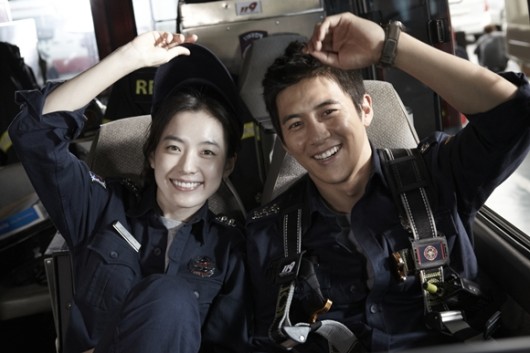 "Love 911" has confirmed a date and is coming out to meet the audience at the end of the year.

Being released in December, "Love 911" has the attention of Chungmuro with its high reviews in editorials.

"Love 911" is about a fire fighter who has shut his heart up in guilt that he couldn't save his wife and a doctor who is about to be fired due to a fatal mistake, treating and curing each other.

Go Soo takes on the role of the fireman who is manly and bad tempered but a level deeper in emotions.

Han Hyo-joo takes on the role of the doctor named Mi-soo, who is positively active towards the fireman Kang-il.

The scene and locations of the movie should present the audience with lots to see and an authentic story.

""Love 911" released on the 19th of December"
by HanCinema is licensed under a Creative Commons Attribution-Share Alike 3.0 Unported License.
Based on a work from this source