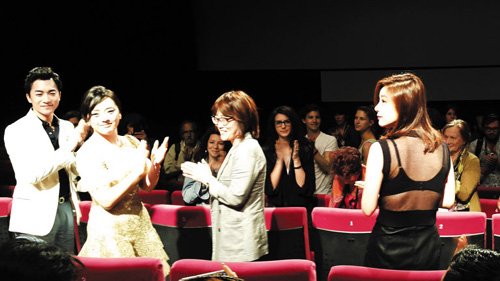 The Korean movie "Madonna" received a rave response in the Un Certain Regard section at the Cannes International Film Festival.

Following its screening at the Palais des Festivals on Wednesday, the film was given a standing ovation by an audience including actress Isabella Rossellini, who chairs the section jury, and Japanese director Naomi Kawase, whose film opened it.

Director Shin Su-won and her lead actors were there to greet the audience.

Director Shin Su-won (second from right) and lead actors greet the audience after the screening of "Madonna" at the Cannes International Film Festival in France on Wednesday.

It is customary for movies that premiere at Cannes to receive a standing ovation, but this year's festival was filled with disappointments from some big names including Paolo Sorrentino, making the unanimous applause for the low-budget Korean film so noteworthy.

"Madonna" examines how small unkindnesses end up destroying the life of a woman. It is a starkly realistic portrayal of the dark side of Korean society, from the breakdown of the school system and top-down working environment to sexual harassment and materialism.

"Low-Budget Korean Film Hailed at Cannes"
by HanCinema is licensed under a Creative Commons Attribution-Share Alike 3.0 Unported License.
Based on a work from this source