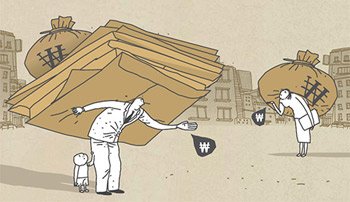 One in four low-income households shoulders an average debt of W39 million, four times more than their average annual income, according to the Korea Institute for Health and Social Affairs on Thursday (US$1=W1,178).

They shouldered W38.89 million in debt on average annual income of only W11 million.

Their annual interest payments were W1.44 million each, or 13 percent of their income.

High-income households that earned more than 150 percent of the median income shouldered W119.7 million in debt, but interest payments were only 4.4 percent of their income.