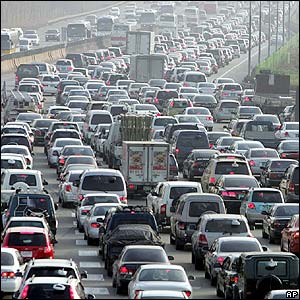 Some 31.54 million people are expected to travel to their ancestral hometowns from Jan. 20 to 25 for the Lunar New Year holidays, a 2.1 percent increase from last year. The Ministry of Land, Transport and Maritime Affairs forecast the number of travelers on Sunday based on phone interviews by the Korea Transport Institute of 6,800 households across the country.

The exodus from Seoul at the start of the holidays is expected to be fairly smooth, since Lunar New Year's Day is next Monday and most travelers are expected to drive over the weekend. But the last day of the holidays falls on Tuesday, meaning congested roads on the way back to Seoul.

The biggest group of respondents (31.5 percent) said they plan to travel to their hometown on Sunday morning, a day before Lunar New Year's Day, and head back to Seoul on Monday afternoon (34 percent).

"Lunar New Year to See 32 Million People Traveling Home"
by HanCinema is licensed under a Creative Commons Attribution-Share Alike 3.0 Unported License.
Based on a work from this source