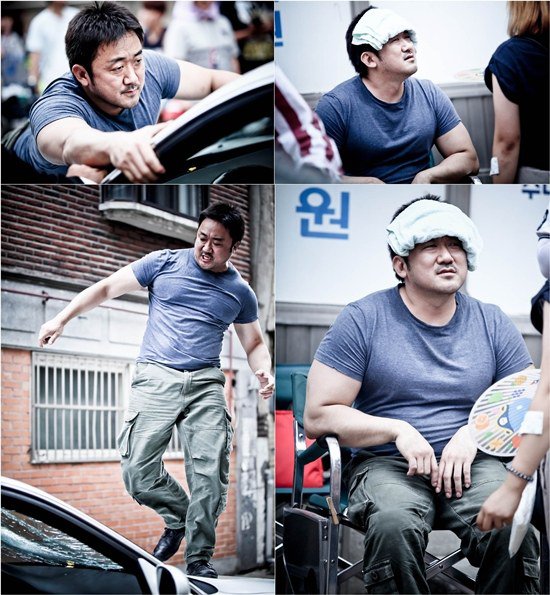 Still cuts of Ma Dong-seok from the OCN drama "Bad Guys" were released.

Ma Dong-seok in the pictures is clinging onto a car or is on top of it, kicking its windows down.

Another picture shows Ma Dong-seok adorably taking a break with a towel on his head. It contrasts the image of him when he's in action.

According to sources, Ma Dong-seok and everyone else involved did great work filming the drama in the dead heat of summer. Ma Dong-seok was so intent on getting his job done that he was injured in his thigh and had to be treated for 6 weeks.

Ma Dong-seok plays Park Woong-cheol, a gang member. He is a rough-and-tumble kind of guy but is bound up with loyalty. He's responsible for undertaking Seoul in just 25 days and is very fast with his punch although he's a big guy.

He's a rough looking Park Woong-cheol who has scars all over his body but he's very thoughtful about his fellow gang members.

To be broadcasted on the 4th of October at 10PM.

"Ma Dong-seok's hot action and break of cuteness in upcoming OCN drama "Bad Guys""
by HanCinema is licensed under a Creative Commons Attribution-Share Alike 3.0 Unported License.
Based on a work from this source