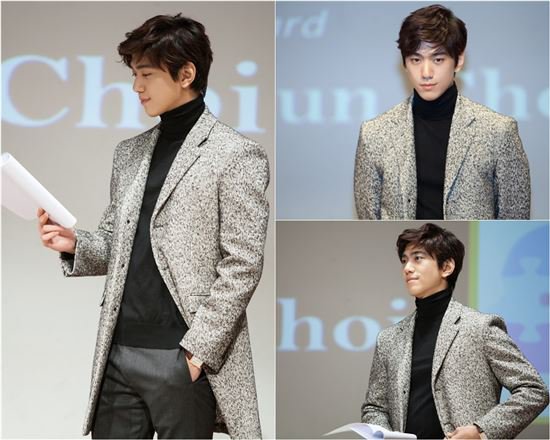 He stars in the new JTBC drama called "Madame Antoine".

"Madame Antoine" is the story of a man and a woman who read the minds of others but don't know their own minds. Ko Hye-rim (Han Ye-seul) is a fortune teller who believes in fantasies and Choi Soo-hyeon (Sung Joon) is a psychologist who is indifferent to love.

Sung Joon plays Choi Soo-hyeon, also known as Soul Doctor amongst Hollywood stars. He's good looking and has a nice smile but hides a layer of coldness under him. He tries to prove that there is no real love and meets Ko Hye-rim, a fake fortune teller.

The pictures show Sung Joon with a smile on his face as he's giving a lecture on psychology. He looks good from head to toe and is completely mesmerized by the role of Choi Soo-hyeon.

Sung Joon has continued to star in various dramas such as "Can We Get Married??", "I Need Romance Season 3", "Discovery of Romance", "High Society" and more. He's fit into every single character he's played like his very own character.

Sung Joon said, "I am anxious to be standing in front of the camera again. I am going to do my best".

Meanwhile, "Madame Antoine" is written by Hong Jin-ah and produced by Kim Yoon-cheol.

""Madame Antoine" Sung Joon kills all with eyesight"
by HanCinema is licensed under a Creative Commons Attribution-Share Alike 3.0 Unported License.
Based on a work from this source