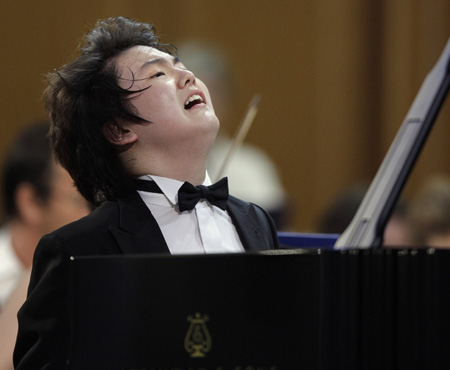 Mesmerized by the sheer talent of a young pianist from Korea, Russian maestro Valery Gergiev made a quick phone call to ensure that teenager Cho Seong-jin became eligible to take part in the prestigious International Tchaikovsky Competition last year.

Following Monday's concert in Seoul by the London Symphony Orchestra, which Gergiev conducted, the 58-year-old told the Chosun Ilbo that he felt compelled to act upon seeing Cho -- who was 17 at the time -- perform.

"I was shocked to hear Cho play in Tokyo last year, so I encouraged him to take part in the International Tchaikovsky Competition. But he said he was still too young to compete", he said. "I immediately called the competition organizers and told them to change the age requirement".

Gergiev, who serves as the artistic director of the Mariinsky Theatre and the principal conductor of the London Symphony Orchestra, is also the chairman of the International Tchaikovsky Competition.

Cho claimed the top prize at the 2008 International Chopin Competition for Young Musicians in Moscow, as well as at the 2009 Hamamatsu International Piano Competition in Japan. However, he was technically unable to try his hand at the International Tchaikovsky Competition last year as only those who are 18 or older are eligible. As the announcement for the competition had been released already, changing the rules was even more arduous.

However, Gergiev demanded the organizers make an exception. "When Russian pianist Gregory Sokolov won the Tchaikovsky Competition in 1966, he was only 16. What's important is music, not age", he said.

Thanks to Gergiev's intervention, the age requirement for the competition was lowered to 16 from last year. Cho clinched third prize in the piano section at last year's competition in June.

Gergiev used a musical term "crescendo" to describe the growing pool of talented classical musicians in Korea. "I'm ready to see [the rise of Korea]", he said.