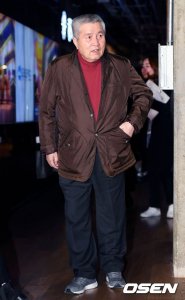 One of Korea's most renowned film directors, Im Kwon-taek, returns with his 100th film at the age of 71. "Cheonnyeonhak" or "Beyond the Years" is based on Lee Chung-Joon's novel "The Wanderer of Seonhak-dong" but the story's origin is Im's previous film "Seopyeonje". He spoke to the Chosun Ilbo.

The movie opens on Wednesday. How do you feel about that?

The opening is a relief. As you know, the production stalled when our investors withdrew their money. Their excuse was that there was no star in the film. But that didn't sound right, considering that there were no stars in my box-office hits "Seopyeonje" and "Janggunui adeul ("The General's Son)" either. Now that everything's going well, I just think about that.

The movie opens in April, which is the same month "Seopyeonje" was released 14 years ago.

I insisted on releasing the movie in April. I know people usually don't see movies this month, but several of my movies succeeded at the box office in April. "Seopyeonje" is one of them.

"Seopyeonje" is a film about artists while "Cheonnyeonhak" is more of a melodrama. Why did you choose the theme of love?

Of the 100 movies I made, not one was a love story. Now that my children are grown up, I thought I should make one. But it's not a romantic movie. It's about love that people are looking for, but missing in their hearts. I want the audience to see this movie like an Oriental painting.

I'm wondering if the slow style of storytelling will work with young moviegoers.

I saw a young audience unexpectedly love "Seopyeonje". Of course there's a generation gap, but I believe we share the same emotions and feelings. It sounds sentimental but I believe it. And actually young people enjoyed the movie at the premiere.

(Laughs) I don't like it. It felt like a burden the first time I was called that. People seem to think of me as this master who knows and understands everything about cinema, but actually it's always a struggle (to make a good movie). The experience of my 99th attempt wasn't that different from my 100th. People call me a maestro, but I don't know how to make a great movie full of experience and wisdom. I just thought that I should make as many movies as I could as I got older. The result is my 100th movie.

If you feel free of the burden, you should make a 101st film.

That's what I want now. And whatever the film is about, I'd like to make it without any burden or pressure, but I'm not sure if I could make one so freely. But that's my wish now.

As a world-renowned director, Im Kwon-taek has introduced Korean themes to a global audience. "Ssibaji" ("The Surrogate Woman", 1986) and "Aje-aje-bara-aje" ("Come Come Come Upward", 1989 ) brought best actress awards for Kang Soo-yeon at the Venice Film Festival and at the Moscow International Film Festival, respectively. "Seopyeonje" (1993) was the first Korean film to draw over 1 million Korean viewers. He also won the best director award at the Cannes Film Festival for "Chihwaseon" in 2002, and in 2005 he was awarded the Honorary Golden Bear at the 55th Berlin International Film Festival.