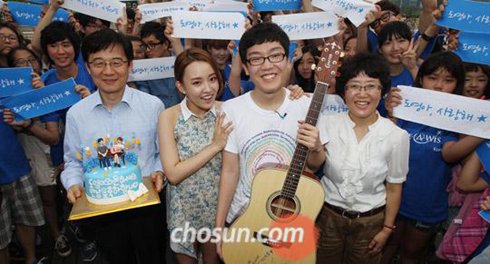 Kim Do-young poses with singer Younha (second left) and a guitar at the Han River Park in Seoul on Thursday.

Make-A-Wish Korea, which grants wishes for children with incurable diseases, received an e-mail on June 2 from the mother of an 18-year-old who has been bedridden for the last three years.

"My son really likes Younha and his only joy in life seems to be listening to her daily evening radio broadcasts", his mother Choi Hae-young (46) wrote. "Would it be possible for him to meet her just once?" The youngster has lived with his hearing-impaired mother all his life.

Kim Do-young has been collecting the singer's CDs, posters and photos. Kim's wish, which marks the 2,000th wish for the foundation, came true when he met her on Thursday at the Han River Park in Yeouido.

The Make-A-Wish Foundation was created in the U.S. in 1980 and the first wish it granted was for a seven-year-old boy in Arizona who had leukemia and dreamed about being a police officer. Make-A-Wish Korea was set up in 2002, becoming the 26th member of the foundation.

Over the last 10 years, the foundation made it possible for a girl with cancer, whose dream was to be a diplomat, to meet UN Secretary-General Ban Ki-moon, and a high-school science buff with leukemia to fly to Microsoft's headquarters to meet Bill Gates.

Actress Kim Tae-hee is most favored by those who apply to the foundation and granted the wishes of around 20 children from 2008 to 2012.

Kim's other wish is to go to university, so he spends four to five hours a day preparing for the college entrance exam.