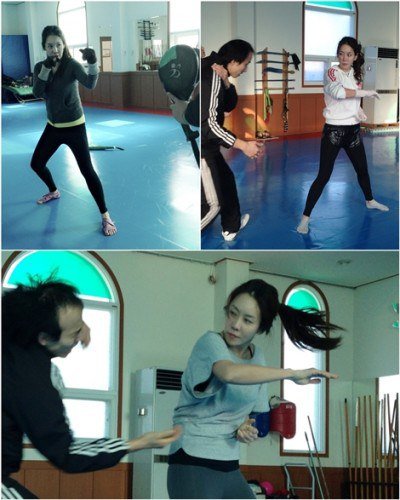 Kim Jung-eun is practicing her action moves for her comeback drama "Make a Woman Cry".

Kim Jung-eun takes on the role of a former female detective named Deok-in who is also known as the female version of Hong Gil-dong. She has to deal with men in a lot of the scenes so she has been practicing her action moves day and night.

Her sponge-like understanding and attempts allowed her to perform intense levels of action and surprised everyone.

Kim Jung-eun also went through some change for a new image in the drama and because of her role as the lady in the snack corner in front of a school, she also practices a lot of cooking.

Kim Jung-eun's agency claims, "When she is given a role, she goes through a lot of preparations for it. She always attends action school and even works out with yoga and Pilates".

"Make a Woman Cry" is about a woman who lives on after losing her son and a wealthy family. The cast includes, Ha Hee-ra, Kim Jung-eun, Song Chang-eui, Lee Soon-jae, Seo Woo-rim, Kim Ji-yeong and others.

""Make a Woman Cry" Kim Jung-eun's action practice"
by HanCinema is licensed under a Creative Commons Attribution-Share Alike 3.0 Unported License.
Based on a work from this source