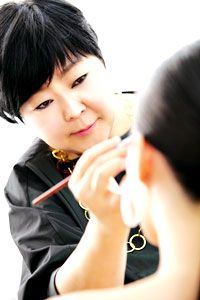 By Cathy Rose A. Garcia

"Veni, vidi, vici (I came, I saw, I conquered)" is the famous line uttered by Julius Caesar that served as the inspiration for celebrity makeup artist Lee Kyung-min's cosmetics line Vidi Vici.

Lee is hoping Vidi Vici, as the name suggests, will become the Korean makeup brand that will emerge victorious in the international market.

"My dream is to have Vidi Vici known all over the world", she told The Korea Times at her office in Sinsa-dong, southern Seoul.

During the interview, Lee talked about her 26 years as a makeup artist to stars like Kim Hye-soo, Shin Ae-ra and Ko So-young, as well as her cosmetics business, beauty salons and makeup training academy.

The makeup entrepreneur has come a long way from a student who dreamt of being a painter. In 1984, she was enrolled at Sungshin Women's University's Department of Western Painting, but it soon became apparent that her skill was not just in using paints, but also using eye shadows, lipsticks and blusher.

Friends asked Lee to do makeovers for them, and someone suggested she do part-time work as a makeup artist at an agency. "That was a turning point in my life. I started doing makeup for models and entertainers. I also did freelance work for advertisements, magazines and TV", she said.

Although in the mid 1980s, being a professional makeup artist was not a popular occupation, she was emboldened by the encouragement of many people, including her clients like actresses Choi Jin-sil, Chae Shi-ra, Kim Hye-soo and Shin Ae-ra.

Eventually, Lee became known as a trendsetter among makeup artists, and this led to her opening her own beauty salon Foret, which now has 11 outlets.

In 2003, she decided to start her own makeup brand Vidi Vici by Lee Kyung-min, with a company composed of only five people.

"All these global beauty brands are formulated for Caucasians, the skin tone, texture and colors are different. I knew it was necessary to create a makeup line specifically for Korean and Asian people's skin", she said.

Initially, Lee found it difficult to have her products sold at Korean department stores, which had policies of only offering space to global cosmetics brands.

"I met with the department store people, and they told me that they knew who I was, but not Vidi Vici. I felt helpless because I couldn't do anything so I prayed a lot. Then they invited me to do a promo at the department store, and so many people liked it", she said.

Vidi Vici was the first signature brand by a local makeup artist sold at the department stores' beauty section. Now it is available in 13 department stores in Korea, where it competes with brands like Lancome, Chanel, MAC, Shu Uemura, Bobbi Brown and Laura Mercier. The premium brand has distinguished itself with its sleek packaging and high quality cosmetics, which are manufactured in Germany, Italy, Japan, Switzerland and Korea.

"Vidi Vici is for the modern lady. I want to give them something to make them feel special and to show their inner beauty", she said, having also recently released a book on make-up tips.

Business has been successful, with Vidi Vici now being sold in department stores in Hong Kong. Lee is planning to expand Vidi Vici's distribution in the international market, such as Taiwan, Singapore and Dubai. She believes with the help of hallyu or Korean wave, Korean brands like Vidi Vici will be propelled into the global spotlight.

"I want to show the creative talents of Koreans through my products... I know it will be hard, but I have this passion to show Asian culture to the world. I will do my best", she said.

With all her success, Lee also makes sure to give something back to society. She has been an active supporter of the International Vaccine Institute (IVI) for the past six years.

With more than two decades as a makeup artist, Lee admitted she is lucky to have found a job that she truly enjoys doing.

"As a makeup artist, I know I can transform a woman's face. It makes me feel happy to see the face of someone who has been changed by makeup", she said.
_______________
Makeup artist Lee Kyung-min, executive creative director of Vidi Vici, will expand the cosmetics line's distribution in Taiwan, Singapore and Dubai. / Courtesy of Vidi Vic

"Makeup artist eyes international market"
by HanCinema is licensed under a Creative Commons Attribution-Share Alike 3.0 Unported License.
Based on a work from this source