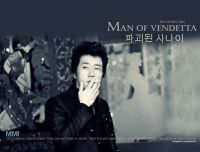 "Man of Vendetta", which was released on July 1st in South Korean theaters nationwide, took the top slot among Korean movies that debuted on the same date.

According to Korea's Nationwide Nationwide Computerized Box Office Data System or KOBIS, the movie was shown in 323 cinemas nationwide and sold 66,119 tickets, grossing 478,575,200 won on its first day run. It beat "I Came from Busan" (영도다리), a drama about teenage pregnancy (directed and written by Jeon Soo-il) and "Boto" (Pink Dolphin/분홍 돌고래), which tells about a young girl's search for a mysterious pink dolphin (directed by Jo Yeon-soo). Meanwhile, "Man of Vendetta" (21.1%) placed second after Shrek Forever (22.8%) in the overall ranking among movies released in July 1st.

"Man of Vendetta" tells about a father's desperate struggle to bring back his daughter, who he lost 8 years ago. It stars Kim Myung-min in the title role and Uhm Ki-joon in the supporting role. The movie was written and directed by Woo Min-ho, and produced by iFilms and I Love Cinema.

""Man of Vendetta" tops box office among Korean films released on July 1st"
by HanCinema is licensed under a Creative Commons Attribution-Share Alike 3.0 Unported License.
Based on a work from this source