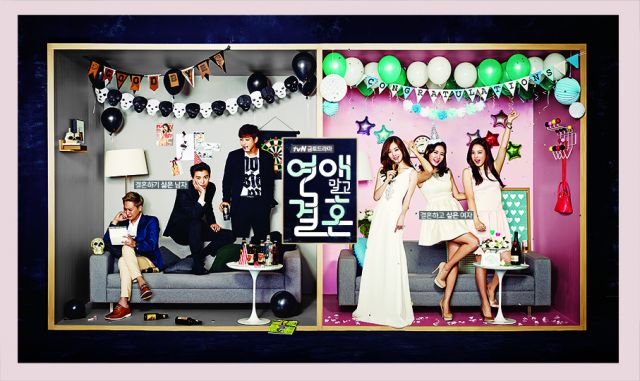 TvN has long been a powerhouse of romantic comedies. The "I Need Romance" series, the Answer series ("Answer Me 1994", "Answer Me 1997"), "A Witch's Love", "Emergency Couple" were all released in the past two years and received monstrous praise.

Their latest release, "Marriage Over Love", looks to continue the trend of strong romcoms. The premise is simple enough, Kong Ki-tae (Yeon Woo-jin) is a man who refuses to get married despite the constant demands of his family to do so. He's resorted to throwing every single one of his blind dates and learning how to play others for his own personal gain.

Joo Jang-mi (Han Groo) is a woman who only believes in true love. After falling head over heels for Ki-tae's friend, Lee Hoon-dong (Heo Jung-min), she is promptly dumped when she hints at marriage. Unable to take the hint, she continues to pursue Hoon-dong and continually runs into Ki-tae instead. When she is arrested for stalking her ex, Ki-tae even comes to her rescue.

He decides to take her under his wing and teach her how to not only get over Hoon-dong but to also give up on love and become a player just like him. He of course isn't doing it for her, but instead so he can use her to scare his family out of pushing him into marriage. In the end however, he may have gotten more than he bargained for by introducing her to his family.

2AM's Jeong Jinwoon plays another handsome man, Han Yeo Reum, who seems to be interested in Jang-mi. Secret's Han Sunhwa plays one of Ki-tae's past loves who seems unwilling to let him out of her grasp and Jang-mi's friend Nam Hun Hee (Yoon So-hee) also joins the mix.

With six gorgeous and young single people all in one drama, I'm sure there are bound to be love triangles and more messy break ups. But don't write this one off! The characters so far are endearing and the cast seems to have good chemistry, despite the seeming predictability of the plot.

"Marriage Over Love" airs every Friday and Saturday evening. So far, only two episodes have been released and they are definitely enjoyable. If you enjoy romantic comedies, you should definitely check this one out!

"Marriage Over Love"
by HanCinema is licensed under a Creative Commons Attribution-Share Alike 3.0 Unported License.
Based on a work from this source