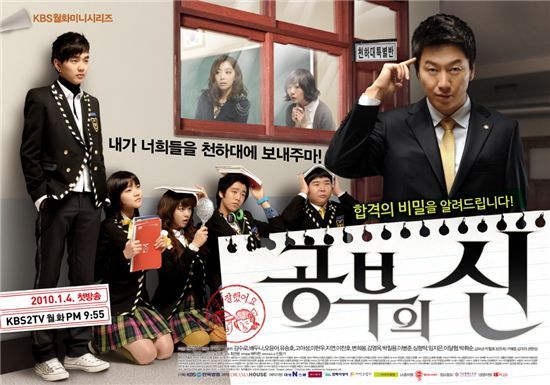 TNS reported that the Monday and Tuesday evening drama scored national viewership ratings of 24.7 (on Feb. 16) and 21.3 percent, respectively, on each of its episode this week.

Figures revealed by AGB Nielsen were slightly lower, at 22.9 for last night and 20.6 during the previous episode, but well above its two rival shows airing in the same time slot -- MBC's "Pasta" and SBS' "Jejoongwon", trailing behind with ratings of lower than 20 percent for both evenings.

"Master of StudyStudy", starring Korean actor Kim Soo-ro as the main character, is a story about a determined lawyer who offers to teach five rebellious students and get them accepted into the country's most prestigious college.

Based on a popular Japanese comic series "Dragon Zakura", the show also stars some of the most talented young actors in Korea including Yoo Seung-ho, Lee Hyun-woo and Go Ah-sung as high school students wanting to get into the top school and also experiencing young romance.

""Master of Study" most-watched Mon-Tue night show"
by HanCinema is licensed under a Creative Commons Attribution-Share Alike 3.0 Unported License.
Based on a work from this source