Mc Mong: More Than a Joker 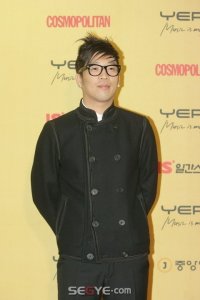 Looking at him laughing, chatting and moving around makes one think he lives up to his name, MC Mong, associated with a naughty monkey. He is precariously perched between being a rapper and an entertainer, but Hip Hop is what he does best. Now he is also trying to be mature, practicing forgiveness and reconciliation. With his recently released third album topping all music charts, he may be the busiest star in Korea right now. "I can't remember all the things I did even yesterday", he says hyperbolically. "I gave 20 interviews alone". His first album, released among doubt and concern of people around him, became a big hit, so did the second one. With the third also a hit, there can be no more doubting his ability.

The title song of the third album is "Ice Cream", likening the chill of parting to ice cream. He said he got the idea trying to find a funny way to tell a sad story -- being funny, after all, is his trademark. MC Mong writes most of his songs himself. Sometimes, when he is in the right mood, he can write several in half an hour; then others take him a month or more. Because of his rowdy, fun-loving high-school boy image, not many people know that privately he is a reserved person, or how committed he is to writing songs.

Yet it was dancing that fascinated MC Mong first. He says it was a real shock to watch Seotaiji and Boys perform on TV for the first time when he was in middle school, and he often stayed up all night copying the group's dances. He got to know about rap through a high school friend who was a big Hip Hop fan, and started to pour all his heart into it when he was sophomore at high school. Ten years have passed since then. Only his close friends know that he has kept a diary every day and tried to memorize all American Hip Hop tracks as a source of inspiration.

"I went to many agencies with my friends until I finally got a call from one of them in late 1998", MC Mong recalls. "I got to join a boy band, PeopleCrew. Right on the day after I got the call, I took part in the recording and shooting of a music video. That's how I started. I learned everything I need to know in this business right in the field. I never thought that my life would change in an instant like that".

He says he is a quiet person. "The image projected on TV is just another part of me that I haven't realized", he continued. "My childhood friends are often surprised to see that part of me. Entering this business has changed my personality a lot. To be honest, I became hypocritical to some degree. It's not as easy and glamorous as people think, but I don't have any regrets. It was my choice and I have to be responsible for it. If I complain about it, the public will think that I'm grumbling because I've had it too easy".

MC Mong says he tried to express his feelings and thoughts in his first album and used more imagination in the second, the third incorporates both. A noticeable track is "Secret", which he performed at a showcase on Oct. 12, where he also showed a picture of himself with his father when he was young.

The song is his favorite on the album, because it allowed him to come to terms with the hatred and anger toward his father he felt for almost a decade. He wrote the song at a fairly early stage of production, and afterwards had little trouble all the way to the end. "My parents got divorced when I was in the second grade at middle school, and my father went abroad. We had no contact for over 10 years. I was so ashamed of their divorce that I often told people my father died, and I came to hate him", he said. "I don't feel ashamed about it any more, and that is why I can make songs about my life that I was once unwilling to talk about. It also helped me reflect on myself and forgive myself for holding a grudge against my own father for so long". Finally given a chance to meet his father after all those years of absence, he found him vision-impaired. McMong's mother, who attended the showcase, restrains her emotions listening to the songs.

"If there is one thing I'd like to do besides music, it's acting. Singing on the stage is acting in a broad sense, and I studied acting at college. I have also appeared on several sitcoms and dramas, and that has helped me taste what acting is", the singer said. In fact, he recently acted in a movie. Although it failed with the critics, it has certainly benefited him because an increasing number of offers are coming in.

He confessed he feels more stressed and exhausted these days and sometimes longs for an ordinary life. It may just be evidence of how much public demand there is now.