"Merry Christmas!" message from Song Seung-heon and Kim Tae-hee from 'My Princess' 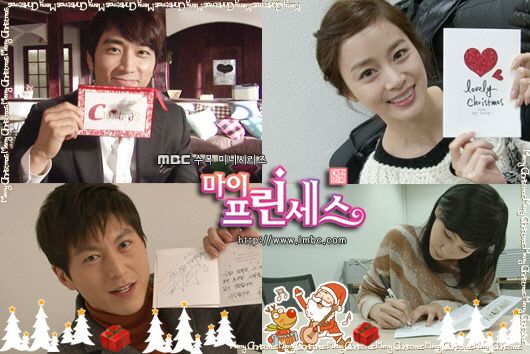 Song Seung-heon, Kim Tae-hee, Park Ye-jin, Ryu Soo-young from "My Princess" sent Merry Christmas messages. They are the main characters of upcoming drama "My Princess" and they revealed their Christmas messages through the official drama website. The clip, which was released on the 9th, four single actors/actresses said that they are expecting the first episode, with beautiful smiles. Production team said, “Christmas card with four actors/actresses signature and messages will be given out through a soon to be special event.”

"My Princess", which is the follow up of "Home Sweet Home", is about the love story between Park Hye-yeong, a successor of the biggest company in Korea, and Lee Seol, who becomes princess from misery university student overnight. This drama will go on air next January.

""Merry Christmas!" message from Song Seung-heon and Kim Tae-hee from 'My Princess' "
by HanCinema is licensed under a Creative Commons Attribution-Share Alike 3.0 Unported License.
Based on a work from this source