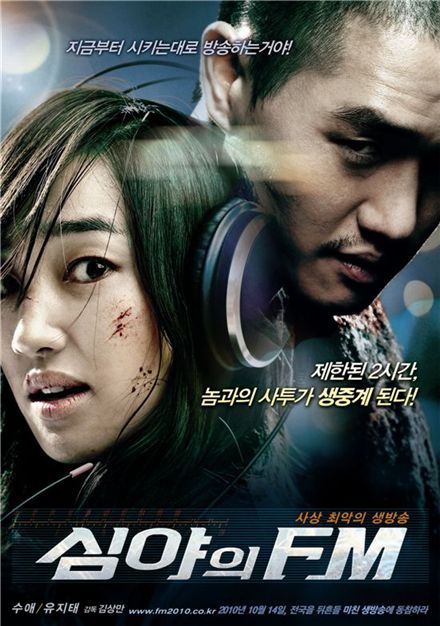 New Korean thriller "Midnight FM" entered the local box office at No. 1 during the weekend of October 15 to 17.

"Midnight FM", starring Korean actors Soo Ae and Yoo Ji-tae, made a successful debut in local theaters during its opening weekend, collecting 277,088 tickets while pushing back three-week winner "Cyrano Agency" to No. 2 with 154,602 moviegoers.

"Midnight FM" is about a late-night radio DJ named Ko Sun-young (Soo Ae) who has to follow the directions of psycho killer Han Dong-soo (Yoo) in order to save her family who has been kidnapped.

Korean comedy tentatively titled "Banga? Banga!" maintained at its place in third once again with 141,732 admissions and newly released Chinese film "Reign of Assassins", starring Jung Woo-sung, bowed into the No. 4 spot with 141,540 tickets sold, then followed by Hollywood romantic flick "Letters to Juliet" with 102,823 admits.

""Midnight FM" places atop local box office for 1st win"
by HanCinema is licensed under a Creative Commons Attribution-Share Alike 3.0 Unported License.
Based on a work from this source