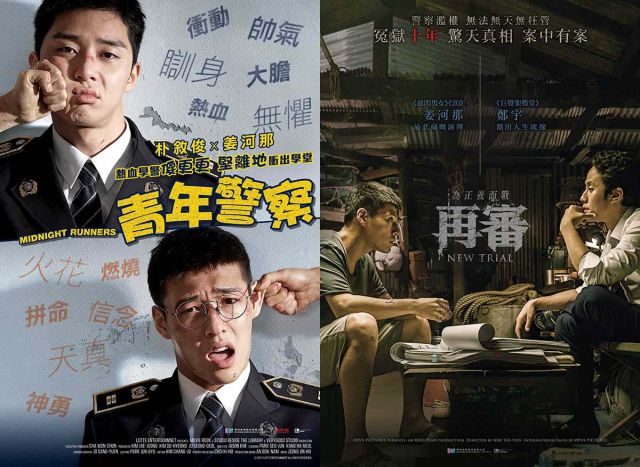 Hong Kong can't seem to get enough of Kang Ha-neul after he last visited the country on August 28 for "Midnight Runners", his last movie prior to enlistment.

Two 2017 movies starring the Korean heartthrob, "Midnight Runners" and "New Trial", will be shown at Hong Kong's "7th Festive Korea" that will run from October 5 to November 30.  The movies will be among the twelve films that will be screened at the "Hall of Korean Film – Kolor Infinity".

"Midnight Runners" revolves around two police cadets (Kang Ha-neul and Park Seo-joon) as they investigate the abduction of a young woman that they witnessed.  The movie has attracted at least 5.6 million viewers since its release in South Korea on August 9 and  is well-known for the strong chemistry between the leads. It is currently South Korea's 4th top grossing domestic film in 2017.  "Midnight Runners" will be screened on October 21 (Saturday), November 12 (Sunday) and November 18 (Saturday) at various venues.

"New Trial" is a film is based on the 2000 "Iksan murder case". It tells the story of Jo Hyeon-woo (Kang Ha-neul), who spends ten years in prison after being falsely accused of the murder of a taxi driver, and Lee Joon-yeong (Jung Woo), a lawyer deep in debt who eventually clears Jo Hyeon-woo's name. The movie topped the South Korean box office on its opening weekend, attracting over one million viewers over five days. "New Trial" will be screened on October 28 (Saturday) and November 4 (Saturday) at Star Cinema.

The Korean cultural mega festival "Festive Korea" was launched in Hong Kong in 2011. It celebrates the appreciation and enjoyment of Korean art and culture in traditional arts, contemporary dance, musical, classical and pop music, cinema and food. This year, outstanding performing groups and top artists will participate at the festival, among them are the Seoul Philharmonic Orchestra (concert), Korea National University of Arts (traditional music and dance) and the World Taekwondo Headquarter Kukkiwo (taekwondo performance). More information about the festival can be found here.

Meanwhile, Kang Ha Neul is now serving his mandatory military duties as a citizen of the Republic of Korea. He enlisted on September 11 and is currently undergoing basic training at Nonsan training center for five weeks. The actor will be deployed as a military police at the Capital Defense Command upon completion of basic training. Discharge is scheduled for June 10, 2019.

""Midnight Runners" and "New Trial" screen in Hong Kong"
by HanCinema is licensed under a Creative Commons Attribution-Share Alike 3.0 Unported License.
Based on a work from this source