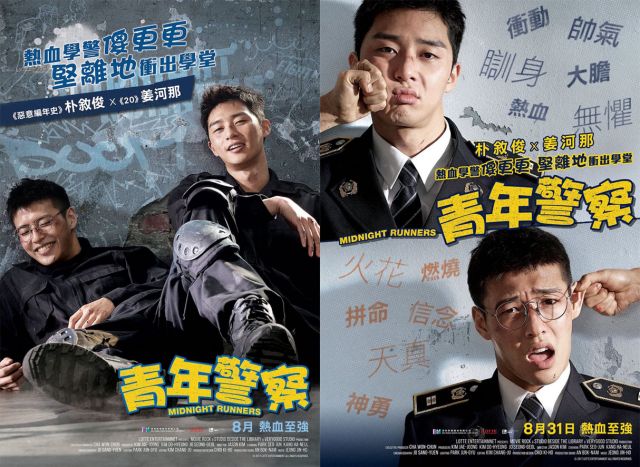 Deltamac (HK) Co. Ltd, a film distribution company that bought the rights to screen "Midnight Runners" in Hong Kong confirmed to kanghaneul.org that the movie will be shown in Hong Kong cinemas on  August 31st.  The theatrical release will be in Korean audio, with English and Chinese subtitles.

It could be recalled that Hong Kong is one of the 6 Asian countries that purchased the action comedy movie during the Hong Kong International Film & TV Market which took place in March this year.

Dubbed as the "the youthful energy-packed action film of 2017", "Midnight Runners" tells the story about two Korean National Police University students, Hee Yeo (Kang Ha-neul) and Ki Joon (Park Seo-joon) as they investigate the abduction of a young woman that takes place right before their very eyes.

"Midnight Runners" premiered in South Korea on August 9th and is currently in No. 2 after "A Taxi Driver". The movie was written and directed by Kim Joo-hwan.

"Midnight Runners dashes to Hong Kong"
by HanCinema is licensed under a Creative Commons Attribution-Share Alike 3.0 Unported License.
Based on a work from this source