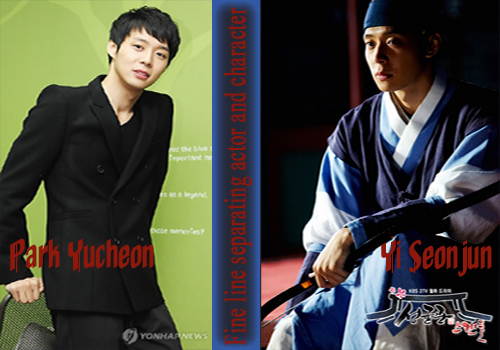 I've been planning to write on this topic for a long, long time. Somehow other things got in a way and this was postponed. Finally, I had some time to spare and collect my (scarce) thoughts and write a post.

My affair with Korean entertainment developed into serious relationship, this is why so many things amuse me now. Fangirls are one thing, but illusions that fangirls have, are infecting, oops, I mean, influencing the journalism in Korea. And this is not about 'we-all-know-which-website' articles. This is about the trend that has roots in fangirls' perception of their bubble world and how it affect the real world.

I've been translating lately tons of articles and interviews on "Padam Padam... The Sound of His and Her Heartbeats", especially Kim Beom ones, and I think they prompted me to write this. I will begin with this as the starting point, and will move to other areas. I've been reading, to my utmost annoyance, "angel Kim Beom", but it looks as if it was only my problem with that. What's wrong? As far as I know, the angel's name was Yi Guksu, not Kim Beom. This young man only played him, he wasn't his incarnation, right? Why, on all feathers that he lost, articles keep repeating "angel Kim Beom"? Oh I know why – to attract the readers, because no one would give a damn about some random Yi Guksu. But this is a move that proves the main point of this whole article – mistaking the identities.

People mistake drama/movie characters with living actors, with people of flesh and blood. Remember lately "Wild Romance" and the situation when main character beat up the waiter? What did the waiter say? That "Kang Jong Hee is a slut". And fandom exploded. "How can he say Jessica is a slut?" Sorry to rain on your parade, crazy fans, but the waiter never used word "Jessica" in the first place. He insulted the character. A fictional person. Not the person who plays her.

I guess it's too much of brain acrobatics for simple-minded fans.

When Kim Nam-gil appeared in the movie "No Regret", people started to question his own sexual orientation because… he played so convincingly. For them that wasn't a display of pure talent, but instead people thought it's his own personality. And stupid questions followed.

Let me elaborate on this more. Ha Jung-woo played a psychopath killer in "The Chaser". Does that mean he has killer inclinations in real life? More, maybe he likes to stock up bodies of random mailmen and cyclists in his yard? Playing a killer means you're a killer? If that was a truth, acting would not be considered as art. We could just borrow some guys from jail and film them. And there is not enough of chaebols in Korea to fill the demand for 'Prince Chaebol – sassy poor Cinderella'.

Few examples of what I'm talking about and they are the recent ones, from the previous week:

"Take Care of Us, Captain" Ji Jin-hee kisses Koo Hye-seon out of relief – I don't think that was Ji Jin-hee that kissed her, but the character he plays in this drama.

"Wild Romance" Lee Si-yeong gets stepped on because of Jessica – again, I'm pretty sure it was about DRAMA characters, not actual actresses, but who am I to judge?

"Padam Padam" Jeong Woo-seong not guilty, reunites with Han Ji-min – as far as I'm concerned, Jung Woo-sung was not charged of anything in real life recently.

Why this is wrong? Because fangirls, who are coming through hard times called puberty, seemingly can't distinguish between reality and screen illusion. If 'their oppa' kneels before some girl on screen or cries his eyes out, all fandom sighs and believes he's the same in real life too. And then we have the case of "I'd beat my daughter and keep her locked in house" (those who are into K-pop know what I'm talking about). This is why fangirling netizens are so attached to one, preferably idealized and sugary sweet image of their oppa. If 'their oppa' decides to play a bad guy, there is a barrage of angry messages why (WAE!!) they 'forced' him to play such a bad guy, he's a sweet boy!

You know this puts shackles on someone's improvement, right? Idols aside, they rarely evolve into real actors, but don't do this to professional, serious actors!

What if someone plays a charming ladies' man in one work and mentally unstable killer in another? This is how things should work for those, who want to polish their skills.

So yes, actors lend their bodies, their voice, face etc. to the character they are playing, but viewers should stop confusing them. Once again Kim Nam-gil's case and Bidam character. Teenagers across the globe love Bidam. Why? Because of Mr. Kim's face and acting skills. Only because of that (and mainly in this order precisely). The fact he came and swept down all drama and characters is the proof of his skills (albeit he didn't display it fully in "Queen Seon-deok", say what you want), not the character. The character was a rotten, treacherous jerk who was never loved and who never loved anyone. But Kim's persona overshadowed the hideousness of this character and we have now some almost religious cult of this particular person.

Articles follow this trend. My small crusade against that will not change a thing. I may just write angrily about 'journalists' confusing this. Labeling actors does them harm, type-casting kills their evolution as artists, fans do not them any favor demanding they would play 'good guys', 'kkotminam guys' etc. forever.

I seriously fail to see why it's so hard to separate actors from their characters they play.

Pictures used to make the picture have watermak left on them, so the source is stated.

"Mistaken identity"
by HanCinema is licensed under a Creative Commons Attribution-Share Alike 3.0 Unported License.
Based on a work from this source