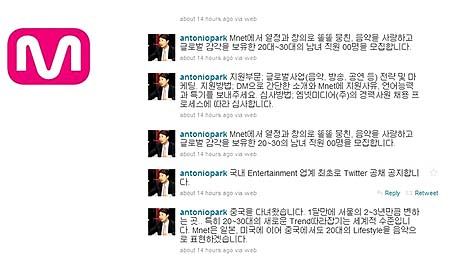 Will Mnet Media start a new trend in recruiting?

The media giant announced Monday that it was planning to start recruiting online through Twitter, the instant messaging service that lets users send and receive short messages of up to 140 characters.
"We believe Twitter is the best communication tool to recruit future employees for Mnet Media, which is working to become Asia's No.1 music and entertainment firm. This will surely help in recruiting some of the most talented and passionate applicants around the world", the company said through a press release.

This is the first time for a local firm to recruit through the online network from start to finish, including posting the recruitment, scheduling interviews and making final announcements.

The Twitter page for Mnet Media's head Park Gwang-won, Open the link, lists the qualifications for applicants and also how to apply.

Numerous users have left tweets on their sites, including @hellodellolla who commented that the announcement was indeed a breath of fresh air, while another named @realize_it wrote that it was amazing and a great way to attract applicants.

Overseas applicants are also welcome to try out for the posts and, according to Mnet Media, many from Singapore and Thailand have applied already. It added that the users welcomed the gesture as it is simpler, faster and easier than the more complicated process of applying for a job.

The micro-blogging service from San Francisco has taken Korean users by storm, with local celebrities, CEOs and netizens posting status updates and short comments about almost everything on their personalized sites. Businesses both here and abroad have made their own Twitter accounts to further communicate with their customers, while American music network MTV has gone further and announced plans that they are conducting a nationwide search for a "Twitter Jockey", a full-time employee that will be present on the social medium.

Mnet Media's new plan is indeed innovative and unique, but as there have been no precedents, the industry and Twitter users will have to wait and see how successful the implementation will be.
For more information about the recruiting process, visit Open the link or follow Park's Twitter at Open the link
_________
The Twitter page of Mnet Media head Park Gwang-won. The media giant announced that it is recruiting applicants through the instant messaging service. / Courtesy of Mnet Media

"Mnet Media to recruit via Twitter"
by HanCinema is licensed under a Creative Commons Attribution-Share Alike 3.0 Unported License.
Based on a work from this source