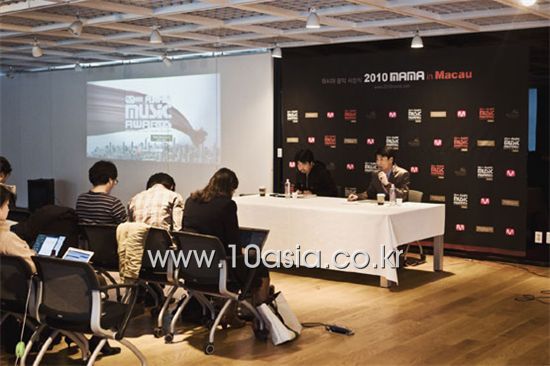 Korean cable music channel Mnet will take its annual music festival to Macau this year, holding the show overseas for the first time as it strives to become bigger than the Grammy Awards.

"Starting this year, we will become Asia's largest music festival which will be produced jointly by broadcasters in Korea, Japan and China and kick it off in Macau", Mnet Media's head Park Gwang-won stated at a press conference held in Seoul on Thursday.

"There is not enough content to represent Asia while we are the main consumers of western music so we need to change that by creating a collaboration which goes beyond Korea", he explained of the initiative behind this year's Mnet Asian Music Awards (MAMA).

The show was broadcast live to Japan and China starting 2008 and last year, changed its name to MAMA, setting the tone to become a music award for all of Asia and was aired in a total ten countries throughout the region.

It makes a full-fledged launch this year with its eyes set on 'becoming an Asian music power which excels the Grammys' by being held for four hours at the Cotai Arena in The Venetian hotel in Macau which has hosted the concerts of various global artists including Beyonce, the Pussycat Dolls and Celine Dion.

Of the reason Macau was chosen as the location, Mnet director Kim Ki-woong explained, "The factors we took into consideration was that it be in the China region to give our Chinese audience easier access and that it be a proper venue for artists' performances".

He added that the show will go to another country in Asia next year although the details have yet to be set.

Hong Kong's TVB, Singapore's Mediacrop, the Philipinnes GMA and Cambodia's CTN, all main public networks of their respective countries, as well as payTV and IPTV channels will air the show live this year.

The top names in the Korean music industry including Rain, Super Junior, 2PM and 2NE1 have been named nominees in the various categories divided in terms of artist, genre and special prizes.

Awards will be handed out based on fan votes and charts of the artists' ranks and single and album sales.

"Mnet takes annual music fest overseas for first time"
by HanCinema is licensed under a Creative Commons Attribution-Share Alike 3.0 Unported License.
Based on a work from this source