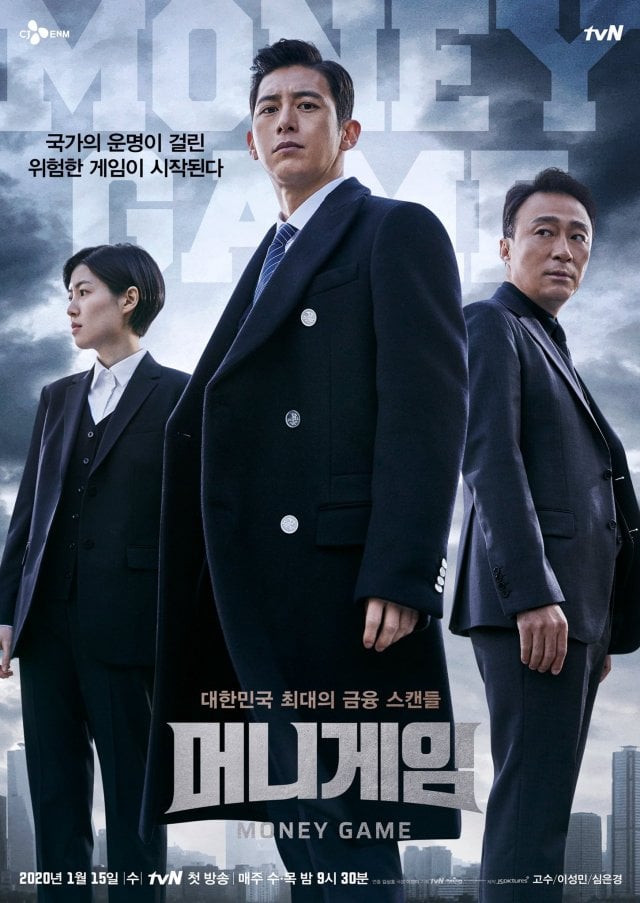 "Money Game", which begins on the 15th of January, is about the breathtaking struggle of those who try to prevent a national tragedy amid the biggest financial scandal, in which the fate of the Republic of Korea is at stake and there is a sharp conflict of beliefs. It is directed by Kim Sang-ho-I and stars Go Soo as Chae I-heon, Lee Sung-min as Heo Jae and Shim Eun-kyung as Lee Hye-joon.

Go Soo's role is that of Chae I-heon, son of South Korea's top economist and a sociopathic economic official struggling to prevent the nation's biggest economic crisis. Lee Sung-min plays the ambitious chairman of the Financial Services Commission who can do anything for what he wants to achieve. Shim Eun-kyung takes on the role of Lee Hye-joon, a poor and unconnected righteous official who rose to public office with effort.

The poster shows the three actors whose characters have the country's fate in their hands. They are standing in front of a gray city with dark clouds hanging over it. It looks like there's a storm on its way and the copy says, 'The game with the nation's fate at risk begins'.

TvN drama "Money Game" begins on the 15th of January.

""Money Game" Go Soo, Lee Sung-min and Shim Eun-kyung Tackle Financial Scandal"
by HanCinema is licensed under a Creative Commons Attribution-Share Alike 3.0 Unported License.
Based on a work from this source