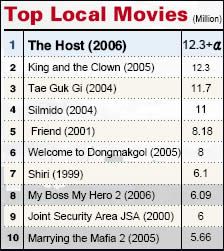 Local monster movie "The Host" overtook the epic film "The King and the Clown", becoming the most-viewed film at the box office in Korean cinema history, and its phenomenal success is continuing setting new records everyday.

The blockbuster directed by Bong Joon-ho Saturday broke the previous ticket sale record _ 12.3 million set earlier this year by the historical piece "The King and the Clown" _ in just 38 days; the latter took 112 days.

"It was spectacular with its computer graphics", Lee Kyu-jung, a 29-year-old office worker, said. "I saw the film after it broke the 10 million-viewer mark as I was curious why so many people had seen it".

The film's fastest pace is attributed to its general appeal to a broad audience with an interesting story and superb special effects.

The film revolves around a family, who fight against a mutant _ acclaimed for its graphic rendering _ rising from the Han River.

"At a glace, the film is an ordinary monster blockbuster such as the `Jurassic Park' series", said Gina Yo, a film critic and professor at Dongguk University. "But what makes the film different from such summer blockbusters is it also deals with social issues about minorities, and talks about a new concept of family".

The record-breaking run is also put down to the fact that the film opened on 620 screens, the largest number of screens ever and almost half of the country's theaters.

It is no doubt that the new records set by "The Host" are welcomed by those who were involved in the production of the film, as its unprecedented success is bringing record high profits.

"The Host" was made with a production budget of 11 billion won and 4.5 billion won for marketing and film printing costs, but it is likely to produce a much higher return.

Its total sales will reach over 90 billion won if it reaches the 13 million mark _ a figure equivalent to the sales of 2,800 NF Sonata sedans, according to a report issued on Aug. 23 by the Bank of Korea.

The net profits for the film's production, investment and distribution companies will be also be at a record-breaking level.

The figures will become even bigger depending on further international sales. It is scheduled to open in Japan, Thailand, Singapore, Hong Kong and Malaysia later this year, and contract negotiations with distributors in Western Europe and the United States are under way.

Many people believe that the film has opened a new era for the local film industry, but there are also concerns over shadows that the film casts on the industry as a whole.

As the film opened on 620 screens and the domination continued for several weeks, other films were unable to find available theaters. The film is now showing at some 300 screens.

Experts point out that from the film industry's perspective, the domination on screens by one or two movies has a negative impact as a whole.

"The domination on screens by one movie is problematic", said Yo, who serves as a board member for the Coalition for Cultural Diversity in Moving Images. "As the film is interesting, it could have been shown at fewer screens for a longer period time than other films".

According to a report from the Korea Institute for Industrial Economics & Trade, the size of the local film market is almost fixed with a total of some 120 million tickets sold annually, meaning that if only a few movies take most of them, the others cannot even think of surviving in the market, which can damage film diversity.