Moon Geun-young, applying for leave of absence to concentrate on her new drama 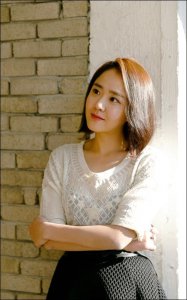 Top star, Moon Geun-young applied for leave of absence to concentrate on her new drama. She is coming back to TV drama in 5 years and it is literally impossible for her to keep both her school works and drama schedules at the same time. She recently submitted her application to acquire permission to leave school for few months.

A spokesman from her agency said, "Moon Geun-young thought that if she's going to keep both her career and school at the same time, she won't be able to perform at the best of her ability for neither of them. So she decided to leave school for few months. As soon as she finishes shooting her drama, she will be going back to her school work".

Moon Geun-young signed a contract to star in a drama based on Lee Jung-myeong's best-seller novel, "Painter of the Wind" and is begin shooting from March.

Ever since, 2003 KBS miniseries "Wife", Moon Geun-young concentrated on her studies and her comeback draw much attention from the viewer and the industry altogether. Especially, she got the role of a genius artist Shin Yoon-bok from "Painter of the Wind" and is going to dress up as a man.

Prior and after signing her contract, Moon Geun-young gave a long good thought about whether or not to apply for leave of absence. Because the "Painter of the Wind" is expected to be around 20  24 episodes and the shooting will begin in March, which will last at least 3  4 months. Thus, it is virtually impossible to continue both her studies and drama at the same time.

Unlike many 'ghost' celebrity students who just leave their names in university classes and focus on their careers, Moon Geun-young had been devoted to her studies and has a perfect attendance ever since she entered the faculty of Literature in the University of Sung-gyoon-kwan in 2006.

According to a report made by MBC 'News Who?" on attendance of many celebrity students, who had a special entrance privilege, from end of September to October 2006, only 3 celebrities made a good records of attendance. They are Moon Geun-young from University of Sung-gyoon-kwan, Yoon So-yi from Dong-gook University and Park Ye-seul from Gun-gook University. Other celebrity students didn't even show up during this 1 month period.

Moon Geun-young had been showing a strong determination to fulfilling on her responsibilities as a student and this application for leave of absence is also seen as her decision to keep her promise of valuing her education.

"Moon Geun-young, applying for leave of absence to concentrate on her new drama"
by HanCinema is licensed under a Creative Commons Attribution-Share Alike 3.0 Unported License.
Based on a work from this source