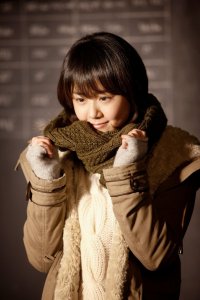 The Korean actress Moon Geun-young, dubbed the "nation's little sister", is seeing her fame extend beyond her native country. Wire agency Reuters recently published an article on Moon titled "South Korea's Little Sister Wants to Grow Up", which was picked up by newspapers in the U.S., U.K, Australia, New Zealand, the Philippines, and Taiwan. This proves her potential to rise to world stardom.

Reuters reports that Moon, with her sweet and innocent image, is "the country's most sought-after celebrity for advertisers". But Korea seems unwilling to allow her to change and grow up. Shaking off the image is proving anything but easy. The movie "Love Me Not", the first she shot after turning 20 and where she plays a grown woman, performed poorly at the box office. And there is the risk that she could lose everything she has in her quest for a more mature identity. As part of her efforts, she appeared in a racy commercial for a mobile company, where she projected a sexier image.

"Because I am a girl now, it is only fair for people to see me as a girl. But as time goes by, I believe I will become a real woman who understands sorrow, love and pain", Moon told Reuters. "But the interest in me is sometimes too much. Expectations are high and I loathe to let people down".

The news agency took due interest in her college life, quoting her as saying, "I am having so much fun in college. If I want to express different images and emotions on screen, I have to learn lessons from real life. It is only when my personal life takes shape that my career as an actress can take shape".