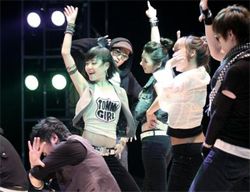 Philanthropic actress Moon Geun-young's 23rd birthday was celebrated with some 700 of her fans and a very special birthday present. Moon's birthday party/fan meeting was held Saturday evening at Sungkyunkwan University in Seoul.

The members of her fan club, Angels, donated more than 370 books, toys, and study materials to the children of Haenam, the southernmost village in Korea. The charity work was carried out without Moon's knowledge, and the award-winning actress found out only when a video message from the children was shown during the party.

The party went on for three and a half hours and featured fun-filled events organized by her fans. Stars such as Kim Tae-hee, Kim So-yeon, Kim Ji-soo, and Bae Soo-bin sent their congratulatory messages and Moon Chae-won, who co-starred with Moon in the drama "Painter of the Wind", made a special guest appearance at the party.