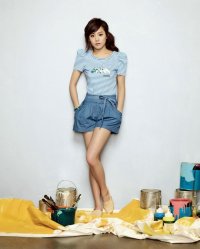 Popular actress Moon Geun-young donated about 300 million won to a learning center for poor children in Haenam, South Cholla Province, near her hometown of Kwangju.

Bae Yo-seop, a pastoral intern at a church in a Haenam, opened an after-school study room for poor children in 2002. About 40 children from poor or single-parent families study there for free.

The program was facing closure in October when the landlord told Bae that the house would be sold off.

Bae recalled in an interview with Yonhap News Agency that a middle-aged couple visited him, suggesting that he find new place for the study room. They bought 1,650 square meters of land, estimated at 75 million won ($79,700), for the program. Only when Bae saw the name on the registration papers did he realize that the couple were actress Moon's parents.

"It was a blessing so overwhelming that I couldn't be sure whether I was dreaming or not", Bae said, expressing gratitude to the 20-year-old actress and her parents.

A new building, equipped with library, computer room, bathhouse and dining room will be built on the land. The 200 million-won expense will be also covered by Moon.

Moon, a graduate of Kukje High School in Kwangju, has donated to charities and social welfare institutions in her hometown several times. She is currently studying at Sungkyunkwan University in Seoul.

"Moon Geun-young Saves Community Learning Center"
by HanCinema is licensed under a Creative Commons Attribution-Share Alike 3.0 Unported License.
Based on a work from this source