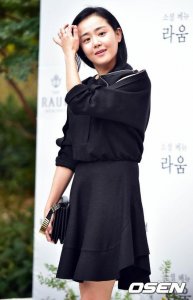 Moon Geun-young will return to the television screen after five years, this time as a 'man'.

Her agency on the 11th announced, "Moon Geun-young has selected the drama series 'Painter of the Wind'. She will play the role of painter Shin Yoon Bok who lived during the later days of Joseon and dress as a man.

The series which is based on the bestseller novel published last year under the same title portrays the life of the genius painter Shin Yoon bok and Kim Hong Do of later Joseon. Moon Geun-young will play the role of Shin Yoon Bok and wear traditional robe of men of the time.

Her agency adds, "The series will focus on the mystery and life hidden behind the few paintings remaining of Shin Yoon Bok. The character in the original novel also dresses as a man".

Shin Yoon Bok in the series is the daughter who is born between Seo Jing, a painter who is murdered by an unknown man, and a celebrated gisaeng who was famous for her gayageum (twelve-stringer Korean instrument). But because of the tragic incident in her youth, she takes on the life as the son of Shin Han Pyeong who is a painter of the government's painting department.

To investigate her father's questionable death, Shin Yoon Bok chooses the life as Shin Han Pyeong's son rather than Seo Jing's daughter. Kim Hong Do teachers her painting and the two develop a friendship.

Moon's agency comments, "The role of Kim Hong Do has not been cast yet and nor has the broadcaster".

However, as SBS announced in their 2008 plans to air the 20 episode "Painter of the Wind" series late last year, SBS is seen to be the most likely broadcaster at this time.

Ku Bon Geun of SBS says, "We have plans to include 'Painter of the Wind' in our lineup if it is possible with the production company. However, there are certain things that need to be settled to finalize the issue".

Moon Geun-young has been focusing on films since 2003 after the television series "The Wife", and has not appeared in any piece since the 2006 film release of "Love Me Not".

Moon comments, "When I first read the original novel, I thought it was only the story of two genius painters of the Joseon era, Kim Hong Do and Shin Yoon Bok. But thinking that in their paintings there may be many other mysteries hidden within their pictures, I couldn't put the book down. I hope the story of Kim Hong Do and Shin Yoon Bok that has been brought back to life through the writer's endless imagination and reasoning will give an opportunity to viewers to rethink about the two characters".

"Painter of the Wind" will start filming in March.