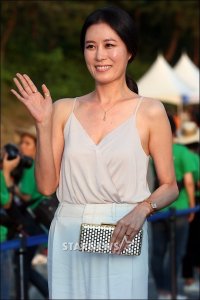 Moon So-ri, an award-winning Korean actress, was a single when she joined the cast for "Sa-Kwa", a movie about relationships, marriage and reunion.

While the release date for the film, directed by Kang Yi-kwon, was put back again and again, Moon got married and her perspective about the movie also changed.

Because of the long delay, Moon expressed her special feelings about the film when she joined the press screening of "Sa-Kwa" in Seoul on Wednesday.

"It's overwhelming", Moon said. "There are so many good memories and stories about this movie, but I felt a sense of helplessness when the release got delayed".

Moon said the much-awaited movie would bring back the younger image she had in her debut film "Peppermint Candy" (2000). "The image in 'Sa-Kwa' is different from how I am today, and I felt as if I was watching myself from the days when I was in 'Peppermint Candy'. I was certainly not sophisticated back then", Moon said.

"Sa-Kwa", whose Korean title can be interpreted as either "apology" or "apple", was originally scheduled to hit theaters in the spring of 2005, but instead entered a three-year period of and neglect.

Moon said that when she portrayed a troubled housewife in "Sa-Kwa", she came away with the realization that marriage is highly demanding and difficult to manage. "When I watched the film at the 2006 Pusan International Film Festival, my husband said he was scared about marriage", she said.

"Sa-Kwa" revolves around the relationship between Hyeong-jeong (Moon So-ri) and and Sang-hun (Kim Tae-woo). Hyeong-jeong, engaged in fashion industry, held a seven-year relationship with her first love (Lee Sun-kyun), only to be dumped in a heart-breaking way. She tries to recover from the breakup by quickly dating and marrying Sang-hun, but things get tricky when her old love comes into her life again.

Hyeong-jeong struggles to hold back her feelings toward her old boyfriend, considering divorce so that she can be reunited with Sang-hun. The movie uses the image of apple as a theme, along with the idea of apology, indicating a complex web of relationships involved in marriage.

"There is no royal road to a successful marriage, except for a willingness to accept your partner and try to improve your marriage together", Moon said. "But I don't think it's a good idea to meet with an old boyfriend in real life".

Her detailed and moving portrayal of a woman with cerebral palsy in "Oasis" led to critical acclaim, including the Marcello Mastroianni Award as best new actress at the 2002 Venice Film Festival. Moon is currently only the second Korean to win a prize at the Venice festival, after Kang Soo-yeon in 1985 for "The Surrogate Woman".

Moon added to her credentials by playing a housewife who has an affair with a teenage boy in Im Sang-soo's critically-acclaimed "A Good Lawyer's Wife", which led to her Best Actress at the Grand Bell Awards in 2004.

Thanks to rave reviews about her acting, she quickly emerged as a leading actress in Korean cinema, taking title roles for big movies in the past years, including "Bewitching Attraction" (2006), "The Birth of a Family" (2006) and "Forever the Moment" (2008).