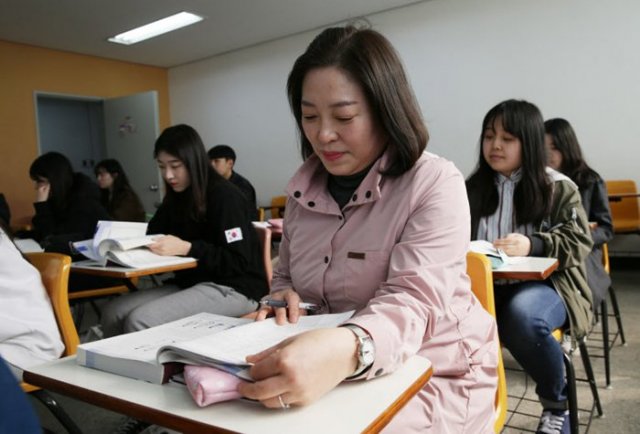 A mature student (center) attends a class with her younger peers at a vocational college in Yeoju, Gyeonggi Province on April 2.

More and more young people are enrolling in vocational colleges amid a growing job shortage especially for university graduates. But many of them are also older people who seek qualifications for a job after retirement.

Some 1,526 freshmen this year are graduates of four-year universities who returned to school to learn professional skills.

According to the council, demand for education among senior citizens is also rising. The most popular subjects among students aged 25 or above are nursing, optometry and social work.

Hwang Bo-eun at the council said, "A growing number of students seem to be looking for practical skills that could make them more appealing to employers".

"More Jobseekers Turn to Vocational Colleges"
by HanCinema is licensed under a Creative Commons Attribution-Share Alike 3.0 Unported License.
Based on a work from this source