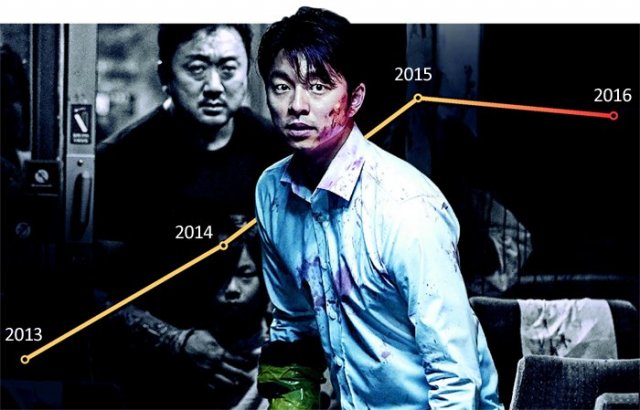 The main reason seems to be that there were no surefire blockbusters last year. Only one Korean film, the zombie extravaganza "Train to Busan", managed to draw more than 10 million viewers.

Movie critic Kang Yoo-jung said this is not surprising. "Korean movies have become predictable and formulaic as producers and directors stuck to tried and tested ingredients", she said.

"Pandora" reminded many of the 2009 disaster flick "Haeundae", and they spotted too many similarities between "Master" and 2012's "The Thieves" and the 2015 flick "Inside Men".

"It seems the days are gone when moviegoers felt a sense of catharsis from their frustrations when they watched films that were critical of society", Kang said.

"Master" and "The King" took critical views of Korean society in the footsteps of hits like "Inside Men" and "Veteran" but failed to offer anything new.

In 2015, every moviegoer in Korea saw 4.22 movies, a huge number in global comparison. But that means many others saw none at all and box office became dependent on appealing to its core demographic.

When that failed, numbers started to go down. Experts say it would be better to offer greater variety to attract a broader audience and rest content with audiences of about 5 million per movie.

Instead, ticket sales are increasingly polarized. Movie critic Choi Kwang-hee said, "We need more quality films in all kinds of genres being released throughout a year, not just summer and Christmas blockbusters".

He added that the increasing dominance of major production studios resulted in a reluctance to bet on more adventurous stories or genres.

This year too, the studios have a number of blockbusters lined up that they hope can reverse their fortunes, including "The Battleship Island" by director Ryoo Seung-wan, which cost W20 billion to produce. But it remains to be seen whether they can open up new horizons for the industry.

Industry analyst Kim Hyung-ho said, "It looks like 2016 was a breather for the industry. There is still potential for further growth".

Cumulative audience in the first 10 months of 2016 surpassed 2015's, but massive candlelight protests every weekend from November as the presidential scandal unfolded kept audiences either busy in the streets or glued to their TV.

In the past, blockbusters like monster movie "The Host" and the period flick "The Admiral: Roaring Currents" transcended traditional genres. "Train to Busan", the biggest hit of 2016, also traversed untried territory in Korean cinema, with its preference for quietly scary ghosts.

"Movie Audiences Dwindle for 1st Time in 7 Years"
by HanCinema is licensed under a Creative Commons Attribution-Share Alike 3.0 Unported License.
Based on a work from this source