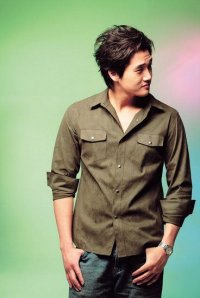 Top-rated actor Yoo Ji-tae has a strong presence in major local films such as "Attack the Gas Station", "Ditto" and is probably best known for his role as an antagonist in Director Park Chan-wook's "Old Boy".

But he doesn't seem to be satisfied with commercial success only. He is diving into a new sphere to create adventurous theatrical works that can often be unprofitable.

The 31-year-old actor, who is also head of Yoo Movie, a production firm for independent film and theater, will star in a new play, "Welcome to Ghost House".

The play will go to the stage at Cecil Theater in central Seoul, on April 10 and run until May 27.

The play's draft is Yoo's brainchild, which developed from his own ideas motivated by his mother. Playwright Park Soo-jin wrote the script based on Yoo's draft and director Lee Ji-na will direct it.

The play starts with a question of what maternity is through an odd and fantastic story _ a real world and a ghost world.

In the story, the TV producers of "Welcome to Ghost House" visit a shanty house where a mother and a daughter live. They encounter In-woo played by Yoo who has the paranormal ability to communicate with ghosts and come to know the tragic story behind them.

"The play is fantastic but tragic. I would say it's an experimental play as it differs in terms of how the story unfolds, mixed with elements of horror and reality", Yoo told reporters in a press conference.

"My mother, who has devoted her life to me, is the basis for the ideas. I want to express the essence of maternity to the audience through exaggerated theatrical devices", he said.

He said that it is worth making an experimental play or an independent film as a commercially successful actor.

"Whether it succeeds or not, I will continue to experiment in theaters and films", he said.

He said that some critics think that movie stars jumping on the bandwagon of returning to the stage is just passing trend.

"But if it stimulates actors to interact with the audience, it is desirable. Nothing can stop their desire to meet the audience on stage", he said.

He said that if these plays with big-name leads encourage people to come to the theaters, it will lead to the improvement of the medium as a whole.

"I was impressed when I saw Meryl Streep performing in a play free of charge in the U.S"., he said.

Yoo said that he is just beginning as a stage actor as he has starred in only two plays. But he said that he believes his efforts to make more creative and experimental plays will pay off in the enfeebled theater industry.

His production company makes it a rule to donate 5 percent of its profits to the Beautiful Foundation, a charity organization.

His latest film work is "Hwang Jin Yi", co-starring Song Hye-kyo, which will be released in June.

"Movie Star Yoo Unveils Stage Ambition in New Play"
by HanCinema is licensed under a Creative Commons Attribution-Share Alike 3.0 Unported License.
Based on a work from this source