Movies, dramas and entertainment shows, 87's are taking over 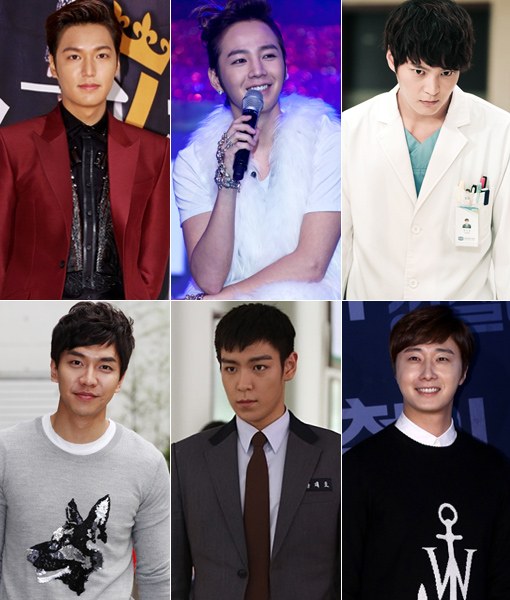 The common thing about male stars who are taking over movies, dramas and entertainment shows is that they were born in the year 1987. Lee Min-ho, Jang Keun-suk, Lee Seung-gi, Choi Seung-hyun (TOP), Joo Won, Jung Il-woo, Ji Chang-wook are some of them. They were acknowledged of their talents since their debut and now they are some of the leading artists in Korea.

Lee Min-ho is currently starring in the SBS drama "The Heirs". He is one of the most trusted actors and this drama has been pre-sold to countries like Japan, China, Hong Kong and other Asian countries just for his name.

Jang Keun-suk is starring in the new KBS 2TV drama "Pretty Boy" in November. He recorded low percentages in recent dramas like "Marry Me, Mary!" and "Love Rain" but all of his dramas are very highly demanded overseas. This time, he plans on solidifying his position as 'The Prince of Asia'.

Joo Won has been successful in every drama he starred in from "Bread, Love and Dreams", "Ojak Brothers", "Bridal Mask" and "Good Doctor". He also stars in the KBS 2TV show "Happy Sunday – 1 Night 2 Days" and is looking forward to the release of the movie "Catch Me".

Choi Seung-hyun has been successful as a member of Big Bang and as an actor. He stars in the movie "Commitment" which is to be released on the 6th of November. He's grown fairly quickly into a well-known actor.

Lee Seung-gi aims for the position of 'entertainment King' in the tvN show Actresses. His experience in "1 Night 2 Days" should allow him to spread out his wings.

Jung Il-woo and Ji Chang-wook are starring in the new MBC weekend drama "Golden Rainbow" and MBC drama "Empress Qi". They have stepped into long-term contracts as these dramas lead up to 30~50 episodes.

All this is thanks to actors like Gang Dong-won, Hyun Bin and Won Bin, whose performances before them have solidified a stage for them to act on. However, some say that these young actors are actually making their own territory by doing what they do best.

"Movies, dramas and entertainment shows, 87's are taking over"
by HanCinema is licensed under a Creative Commons Attribution-Share Alike 3.0 Unported License.
Based on a work from this source