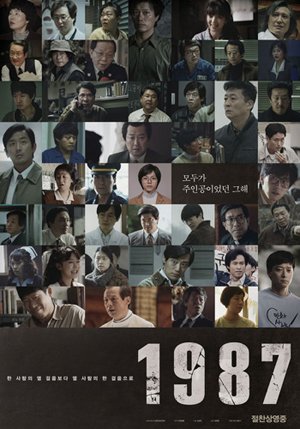 For a Korean movie to break the 10-million viewer mark it apparently has to appeal to young teenagers.

When "1987: When the Day Comes" opened in theaters late last month, most journalists and film critics predicted that it would easily hit the milestone because it is a relatively intelligent tear-jerker with a solid political core. But a month later it had only drawn 6.7 million viewers because teenagers have no interest in the democratic struggle of the 1980s.

In contrast, CGI-heavy fantasy hokum "Along With the Gods: The Two Worlds", which opened a week earlier, drew more than 13.5 million viewers.

Movie theater chain CGV said the two films were expected to compete neck-and-neck, but the outcome was determined by which appealed more to young teenagers.

Total ticket sales do not support this analysis because the box-office sales proportion among teenagers usually does not exceed five percent.

Teens accounted for only 3.3 percent of ticket sales for "Along with the Gods" and moviegoers in their 40s for the biggest proportion at 28.5 percent.

But that only means that they were parents who bought the tickets for their teenage children, and perhaps some of them went as a family.

CGV's survey of ticket sales among viewers in their 40s supports this assumption. Moviegoers in their 40s accounted for a large box-office proportion of animated film "Coco" (44.9 percent), which has no great appeal for adults.