"Ms. Temper and Nam Jung-gi" Hwang Chan-sung, "Back in a while" 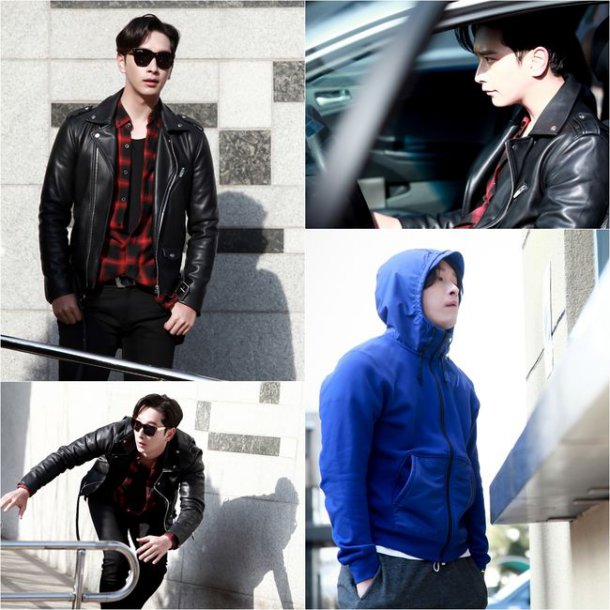 2PM Hwang Chan-sung is back as a 'God unemployed' man.

"Ms. Temper and Nam Jung-gi" is about the everyday struggles of those with authority and those who don't led by the main characters Ok Da-jeong and Nam Jeong-ki.

Hwang Chan-sung is back with "Ms. Temper and Nam Jung-gi" for the first time in 2 years and a half since the 2013 drama "Drama Special - Your Noir". This time he's Nam Jeong-ki's (Yoon Sang-hyun) brother Nam Bong-ki who is not particularly untalented but doesn't really do anything and is unemployed. He loves the phrase 'Youth doesn't mean pain. Youth means fun.'. He doesn't worry about the future but he enjoys the present. He is a pain in Nam Jeong-ki's neck but he's impossible to hate.

In the pictures of Hwang Chan-sung, he's wearing a leather jacket with sunglasses. Then in another picture, he lowers himself as if he's hiding from someone or it looks like a comical scene from a 007 movie. Even the pictures show what a pain in the neck he is.

In another picture, Hwang Chan-sung is wearing a sweat suit looking free and jobless. His hat is on the other way around and is looking at a wall with an unpleasant look on his face.

Hwang Chan-sung was full of energy when making these scenes. His various expressions and quick adaptation increased the expectations of the production crew.

After the first take, Hwang Chan-sung said, "I am excited about the role of Nam Bong-ki. I worried about the drama as it's my first in 2 years and a half but everyone was nice and god to me. I was able to be Nam Bong-ki all I liked and I want to remain a good memory to those who watch the drama".

Hwang Chan-sung's passion for the drama is helping it seem more fun and struggling.

Meanwhile, "Ms. Temper and Nam Jung-gi" is a sad but fun realistic drama about the youth generation these days. It is directed by Lee Hyeong-min and written by Joo Hyeon-I.

The casts are Lee Yo-won, Yoon Sang-hyun, Son Jong-hak, Im Ha-ryong, Yoo Jae-myung, Song Jae-hee, Hwang Chan-sung, Hwang Bo-ra and others. The first episode of the drama is broadcast on the 18th of March on JTBC.

""Ms. Temper and Nam Jung-gi" Hwang Chan-sung, "Back in a while""
by HanCinema is licensed under a Creative Commons Attribution-Share Alike 3.0 Unported License.
Based on a work from this source