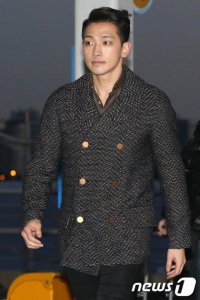 Korean star Rain was Sunday crowned Biggest Badass Star at the 2010 MTV Movie Awards for his role in "Ninja Assassin".

The 27-year-old beat Hollywood A-list candidates such as Angelina Jolie, Channing Tatum and Sam Washington for the award, which goes to a notable performance in an action movie.

He is the first Korean to be recognized at the MTV Movie Awards. There are only four past recipients of the Badass prize who are Asian: Jackie Chan for "Rush House", Zhang Zi-yi for "Crouching Tiger, Hidden Dragon", and Lucy Liu and Chiaki Kuriyama for "Kill Bill".

"Ninja Assassin" was the 27-year-old's first Hollywood lead role and second collaboration with the Wachowski brothers, who are best known as the creators of "The Matrix" series. He made his Tinseltown debut in "Speed Racer", which was produced by the brothers and directed by "V for Vendetta" director James McTeigue.

In "Ninja Assassin", Rain played the part of Raizo, an orphan who is trained by a secret ninja clan to become a deadly killer. But when Raizo witnesses the murder of a friend he turns his back on his clan and plots revenge.

The film was noted for featuring no-cut skirmishes, employing very little visual effects. Rain trained for six hours a day for half a year alongside stuntmen to perform about 90 percent of the stunts using minimal wire support.

Before foraying into Hollywood, Rain first rose to stardom in Asia as a pop singer and in hero TV melodramas. He has appeared in popular shows such as "Full House".

Meanwhile, Korean-American actor Ken Jung won the award for Best WTF Moment for the comedy "The Hangover". The medical doctor-turned-funnyman inspired much laughter for his physical farce in the film as Mr. Chow.

Launched in 1992, the MTV Movie Awards features popular mainstream movies and chooses its winners based on online votes by netizens.

This year's Best Movie award went to "The Twilight Saga: New Moon". Its lead actors Robert Pattinson and Kristen Stewart won the awards for best male and female performances, respectively, as well as the Best Kiss.

"MTV names Rain Biggest Badass Star"
by HanCinema is licensed under a Creative Commons Attribution-Share Alike 3.0 Unported License.
Based on a work from this source