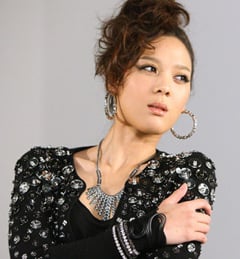 Yoon Mi-rae has been included on the list of the world's top 12 female rappers by TV show MTV Iggy. Yoon joins names such as Mexican rapper Nina Dioz, Muthoni The Drummer Queen from Kenya and Ana Tijoux from Chile on the coveted list.

MTV praised her as the "reigning queen of Korean hip hop". Yoon was born in the United States and possesses a soulful voice that adds natural melody to her rapping.

She also serves as one of the judges on Mnet's audition program "Superstar K 3" and is planning to make a comeback with her new solo album in the second half of the year.

"MTV Puts Yoon Mi-rae on List of World's Top Female Rappers "
by HanCinema is licensed under a Creative Commons Attribution-Share Alike 3.0 Unported License.
Based on a work from this source