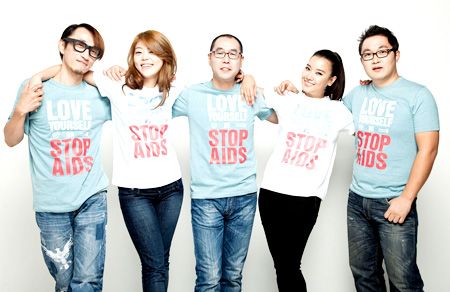 A total of 13 K-pop artists will appear at MTV's Live Wow Special Wednesday evening to perform their catchy tunes and also inform the audience about the devastating and contagious disease.

"Two people are infected with HIV every day on average in Korea, and some 6,000 patients are suffering in Korea. (The concert) is aimed to offer more information on the disease and also actively raise awareness", MTV said through a press release.

Singers Horan, Tim and pop group W&Whale were appointed as goodwill ambassadors for the concert, and they will perform with fellow singers Kim Tae-woo, Secret and 8eight.

The music channel will also air a special documentary "Me, Myself and HIV", which features young patients of AIDS talking about their lives and also their illness openly to the public.

The program follows the lives of two individuals, one from the United States and another from Zambia, who are HIV positive.

They both explain the complicated layer that HIV added to their everyday lifestyle choices, including working, traveling, eating and even dating.

Every 12 seconds someone is newly infected with HIV

80 percent of all HIV transmission is sexual

There are 33 million people living with HIV globally

HIV is transmitted through blood, sexual fluids and mother to child

HIV is not transmitted through tears, sweat, saliva or mosquitoes

"MTV's concert to raise awareness on AIDS"
by HanCinema is licensed under a Creative Commons Attribution-Share Alike 3.0 Unported License.
Based on a work from this source