Musical festival to be held in downtown Seoul 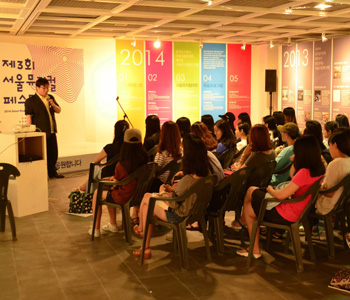 Musical festival is to be held at the center of Seoul. Seoul Musical Festival, Koreas first-ever festival for home-grown musicals, is slated to be held in Chungmu Art Hall and Dongdaemun Design Plaza (DDP) from Aug. 17 to Aug. 24. This year marks the fourth year to hold the event. So far, the festival gave a birth to various creative musicals such as "The Goddess is Watching", "Dwarves" and "Fly, Mrs. Park", which drew great popularity from the public.

The festival consists of the Yegreen Awards, the Yegreen Encore, a gala show to celebrate the opening and a concert performed by musical stars, the Seoul Musical Market, the General Assembly of the Federation for Asian Culture Promotion (FACP) in Seoul and academic programs.

Yegreen Encore, which supports funding for production and theater rental fees to commercialize creative musicals for small-theaters, will showcase "I am an Idol of Joseon" (on Aug. 19), "Red Shoes" (Aug. 21) and "Aranga" (Aug. 23) in Small Theater Blue at Chungmu Art Hall.

In the gala show to celebrate the opening (In the DDP Oulim Square at 8 p.m. on Aug. 19), musical actors and actresses will sing popular musical songs. With actor Oh Man-seok being the host of the show, popular musical stars including Jung Sung-hwa, Michael Lee, Choi Jung-won, Bada, Kim Bo-kyung-III and Jeon Soo-kyung will perform on the stage. Euro-Asian Philharmonic Orchestra and conductor Jeong Joo-young will play popular numbers such as "The Phantom of the Opera", "Jekyll and Hyde" and "Hero". Gala show is a free event and the seating is on a first come first served basis.

The Seoul Musical Market is to be held from Aug. 18 to Aug. 24 around the Chungmu Art Hall where visitors can see trends and current status of the domestic musical market. The market is designed to provide information on Korean musicals to foreign buyers and serve as a distribution platform of the home-grown musicals. The fair will increase the number of booth from existing 17 to 40 this year.