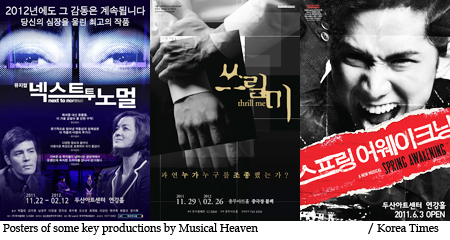 Musical Heaven is a production company in Korea that has staged musicals such as "Menopause", "Thrill Me", "Sweeney Todd: The Demon Barber of Fleet Street" and "Spring Awakening". Currently, its production's of "Thrill Me" and Broadway-hit "Next to Normal"are ongoing.

These feature such non-mainstream themes as menopause of middle-aged women, grotesque murder and power games between a homosexual couple, unlike other hit romantic musicals that boast majestic stage settings. However, Musical Heaven has amassed trusting fans who have confidence in the choice and quality of the company.

Its president and producer, Park Yong-ho, is the person who makes decisions, receives investment and selects creative staff to work on the shows. 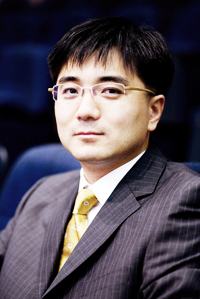 Park, 44, majored in vocal music at Seoul National University. Instead of becoming an onstage singer, he chose another path.
"It is not that I lost interest in music but I found myself more suited to art management and business", Park said in an interview with The Korea Times.

Like many leading producers in Korea, he once worked for the now-disbanded Samsung Entertainment Group in the late 1990s.
His first work there was staging a Korean production of "42nd Street".

"I was one of the few people who had a background in music and a different approach to performance art", he said. "'42nd Street' was a 2.5 billion won project in 1996, a high-risk venture. Starting with such a big project broadened my vision".

After Samsung Entertainment Group's dissolution in 1999, Park worked at several companies including Unitel, SJ Entertainment and Seensee Company. His goal became clear as he worked for those companies and led him to establish Musical Heaven in 2004.
"I wanted to produce good works based on my standard", he said. So the name Musical Heaven bears Park's wish to reach a utopia for musicals.

It is sometimes called a production company of murder and gay romance, as its major works are related to such themes. Park denies such doubts in his taste.

"I think it all comes down to basics. If it is a thriller, it should be worthy of being a thriller".

Still, he clarified that he is the decision maker. "I try to watch the show before making a choice. I have to know it thoroughly to assign local creative staff members and the best way to do so is experiencing the show with five senses", the producer said. "However, keen competition among Korean musical producers dulled my senses a bit. For instance, I was talking with 'Spring Awakening' producers even before it headed to Broadway, but all bets were off when it won the Tony Awards and other Korean producers tried to bid for the license".

Park is confident and proud of his productions. "The quality of the production does not always come with box office success but expressing the theme of the musical precisely is the key", he said. "It is like using fresh ingredients without much seasoning in cooking".

He also emphasized that being firm in one's belief is important. "Despite how people evaluate me, I have my color and convictions, which have not changed since 1996 when I jumped into this business", he said. "My taste lies on the boundary between artistic value and box office hit, but the difference between being commercial and nonprofit is paper-thin, as most musicals are not considered artistic when they become financially successful".
Creative staff

The producer seems to have a knack for finding the right creative staff regardless of where they are from. He brought British director Adrian Osmond to "Sweeney Todd" and Javier Gutierrez to "See What I Wanna See" in Korea and both received critical acclaim for the unique style. The company is working with Osmond again for its original work "Bungee Jumping of their Own", which is being developed now.

"I have good personal connections overseas and receive recommendations from them based on the credibility I have built", he said. "It is a series of making decisions and sometimes I make the wrong ones. But making a musical is a collaborative process and we make advances together in the end".

Park said a producer should share the concept of the musical with his staff. "After discussing the concept of the performance, I entrust the rest to them", he said. "If I trust them, I just leave it to them. I can ask for modification, but it should be based on consent".
Park pointed out that Korea lacks an educational base for actors. "Theater is live entertainment and untrained actors cannot fool the audiences. Without a proper education system, the musical industry becomes a house of cards".

He said when he holds auditions, more than 1,000 people apply and most of them are students with some 500 of them being eliminated during document screening.

"Universities are not flexible enough to educate actors and they have to be trained again to become professionals. I think theater departments in schools should create connections with other departments studying classical music and dance".

In 2012, Musical Heaven will stage "Lovers in Paris", based on the hit 2004 television drama by the same name. It is also working on a revamped version of "Sneak Up on Me", the first-ever homegrown musical, which premiered in 1966, scheduled for next year.