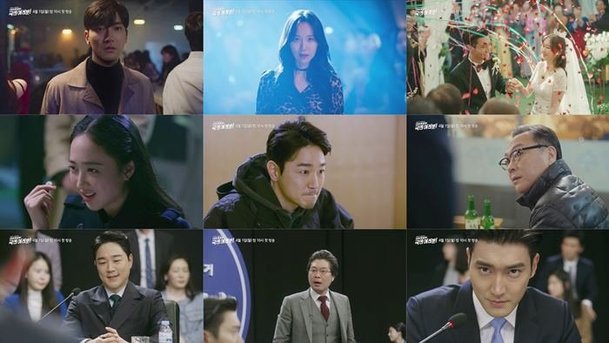 The new KBS 2TV drama "My Fellow Citizens" revealed its highlights. Anticipation rises as the drama deals with a scammer, a cop, a loan shark, and a member of the National Assembly.

#1. How are a scammer and cop married?

Yang Jung-gook (Choi Si-won) manages to trick loan shark Park Sang-pil (Kim Jong-goo) with money that's been put on hold for transactions. However, Jung-gook is conned by his own girlfriend and he desperately goes looking for her. Policewoman Kim Mi-young (Lee Yoo-young) responds to a call and it's her boyfriend (Choi Sung-won) having an affair. A conman and a policewoman meet like this and get close. In drunken state, they both hide the fact that they are conman and policewoman and end up getting married.

#2. Why does a loan shark need a member of the NA?

Loan shark Park Hoo-ja (Kim Min-jung) declares revenge on Jung-gook who is the cause of her father sick in the hospital after being scammed of 6 billion won. She finds Jung-gook and threatens him to run for election if he wants to live. Then she goes to Han Sang-jin (Tae In-ho) who returns from the States after a long-term political education abroad and offers to 'support' him forever if he ran for by-election. Hoo-ja inherits her father's money lending business but why does she need a member of the National Assembly?

#3. Will a conman become a member of NA?

What will happen to Jung-gook who has to become a congressman 'to live'? He's great at tricking people but he knows nothing about being a congressman. So Hoo-ja sets up an appointment for him with another congressman named Kim Joo-myung (Kim Eui-sung). Having met all sorts of people over 12 years, Joo-myung looks past Jung-gook's lie that he's from the Financial Department of Seoul National University. At the end of the video, Jung-gook stands shoulder to shoulder with Han Sang-jin and Kang Soo-il (Yoo Jae-myung) at a candidate debate.

"My Fellow Citizens" is a comedy criminal drama about a conman who marries a policewoman and gets involved with unwelcoming events. The drama begins on the 1st of April.

""My Fellow Citizens" Choi Si-won, Lee Yoo-young, and Kim Min-jung's Scam "
by HanCinema is licensed under a Creative Commons Attribution-Share Alike 3.0 Unported License.
Based on a work from this source